I promised myself I would finish the wip’s I had lying around. For some reason the projects kept piling up and nothing was getting finished. To make matters even worse, I had a severe case of startitis and ended up promising/ casting on for more. Now that I’m back to organizing (and blogging again) I’m happy to say that my efforts are paying off, and that there’s actual progress to be shown! 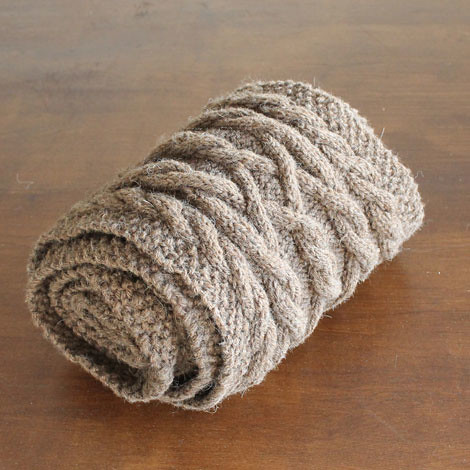 Dryad is a pattern by BT’s Jared Flood. I think he’s an amazing designer and I’ve knit a few of is patterns already. I really like the way he makes knitting and cables look. I’m only a simple blogger but I tried to do it justice by taking (hopefully) nice pictures. I’d normally just take simple pictures to show the project, but this one just asked for a little more effort 🙂 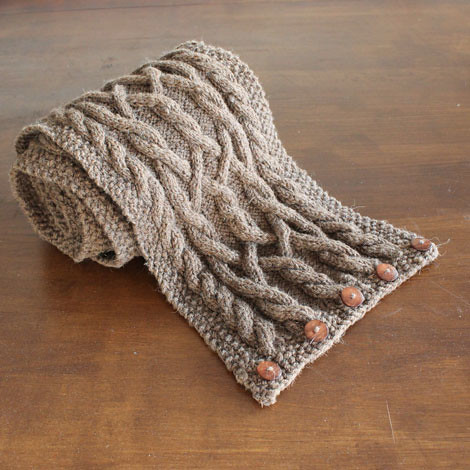 This project started out as a bag of 500 grams of Manx Loaghtan roving I bought at Wol met Verve. I was going to spin it with my golding spindle and see how much yarn I could pack on there. Let me take you back to 2013 for a minute 😉 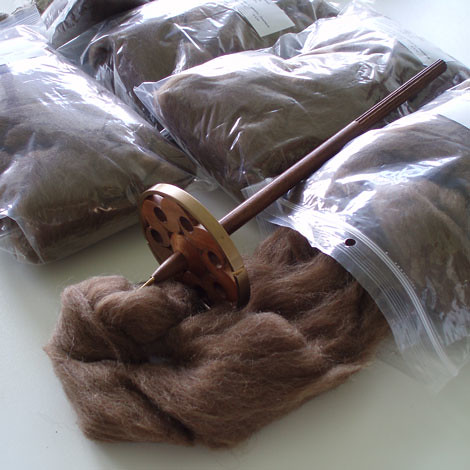 I started spinning in 2009, but I still consider myself a new spinner. I think you’re never too old to learn, and sticking to vanilla merino just isn’t my style. I want to expand my knowledge and try out new things, so when I found out I could buy Manx Loaghtan in roving I knew I had to try some. So I decided to buy 500 grams, because my life’s philosophy is ‘go big or go home’. Also: what’s the worst that could happen? The fiber was really cheap (compared to the fine merinos and such) and it’s not like it’s going to get spoiled or anything. If I didn’t like it, I’d just give it to another spinner who might appreciate it more that I would. 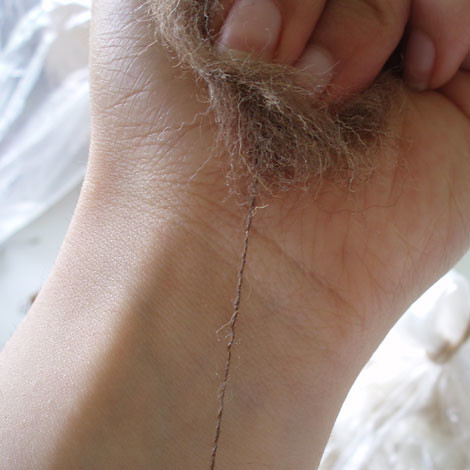 So with nothing to lose I tried to spin it. I fell in love after the first try. This stuff almost spins itself. You really don’t have to do anything. It’s almost as if it was made to be spun on my golding. I’d just hold it in my hand and let the weight of the spindle take care of the rest. 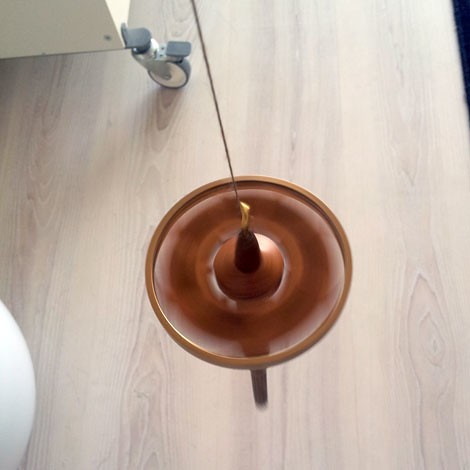 Look at it go 🙂 I really love this spindle 😀 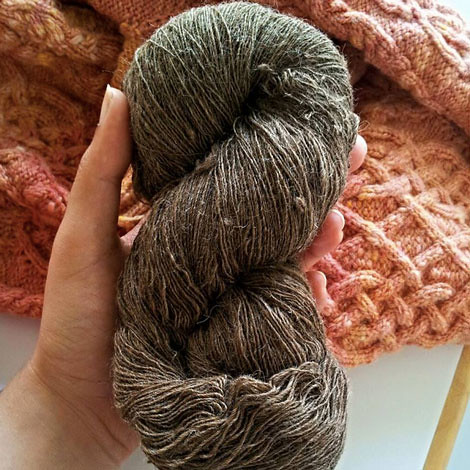 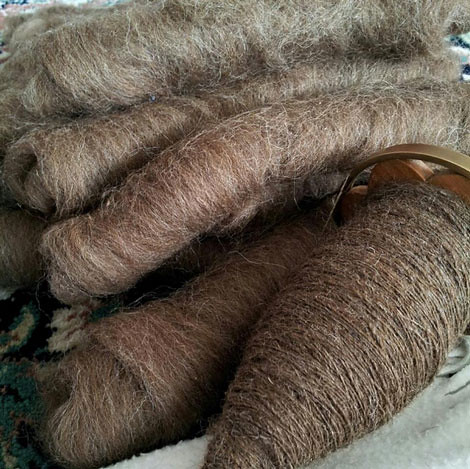 I made faux lags for this fiber because it made the spinning that much easier and faster. So I’d prep 100 grams and put it in a freezer bag and slowly spin it up faux lag by faux lag. It was great. During the Tour I’m the most productive, but after the tour I’m not nearly as productive when it comes to spinning. I think it’s because I don’t take enough time or haven’t planned a special spinning day. I’m thinking about introducing a special day only for spinning in my life. Herein I see the great advantage to supported spindles. I don’t spin during the day, but I like to have a special time for spinning so I can dream away and focus mainly on what I’m doing. So drop spindles are difficult because I don’t travel enough (I can always take my wheel with me). My wheel is nice but after a long day of work I sometimes lie down rather than sit down. I sit on a chair most of my day so I’d rather put my feet up after a day of working. Here’s where supported spindles reap the benefits. I can put my feet up and put my arm on the armrest and just happily spin away while lying down.

I’m drifting off, back to the story: 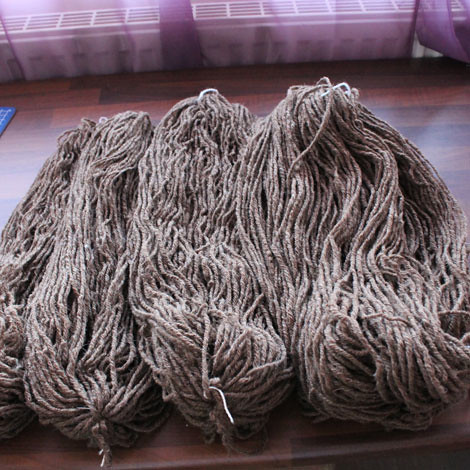 Next June (2014) it was all plied up, using my old wheel because it has huge, bulky spools. I know I measured the yarn, but I can’t find the exact data right now (how surprising..). 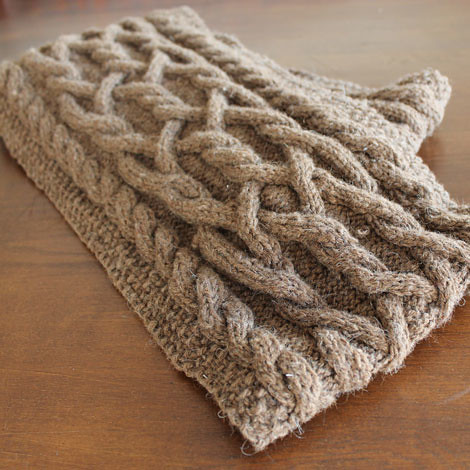 In the end I’m really pleased with the way it turned out!  I think the cable pattern and the yarn are a great match. Manx Loaghtan has a micron count of 28 – 37 and has a staple lenght of 3″-5″ (8-13cm), so it’s not really soft, but I think it’s okay for a scarf. I don’t mind the scratchiness, I think it’s actually very nice. 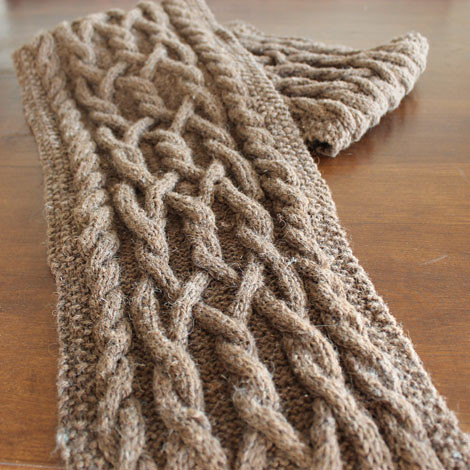 I’ve spun a few yarns now, and I’ve knit some things with my own handspun, but I have to say that this was by far the most pleasant experience. The yarn was so extremely bouncy, it almost felt store-bought. I don’t say this to toot my own horn, I see it as a great thing about the fiber. I believe that all the spinning in the world can’t make a crap fiber look and feel good. I do believe that crappy spinning can make amazing fiber feel like crap. So I think the fiber is amazing 🙂 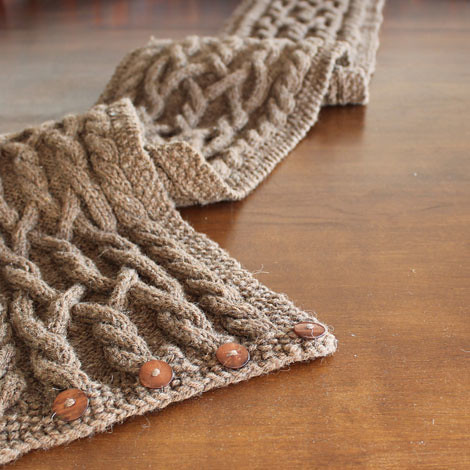 I had to add the buttons because I ran out of yarn before the scarf was long enough to function as a scarf. But now I can close up the buttons and use it as an oversized (double held) cowl, or I can wear it as a sort of bolero, crossed over my torso. I found these cute buttons in my moms button collection, so thank you mom! 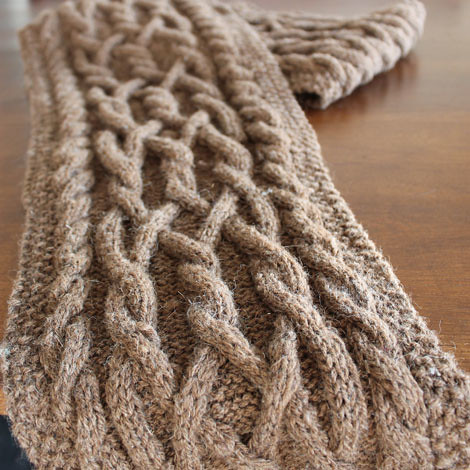 And so I finished my second FO of 2015. I hope to have my life organized again so I can keep track of my FO’s. Or at least produce more of them 🙂