You probably thought I’d completely forgotten about this blog. Well, not to worry. I haven’t forgotten. It’s been eating at me since the last post and I’ve been trying out a few things that haven’t been working for me. I’ve actually written up two posts between this one and the last one, but I never got around to post them, because I never took any pictures.

You see, the last couple of weeks I’ve been getting less and less sleep during the night, so I’m forced to take a lot of naps during the day. This doesn’t really work out the way I hoped because I’m really  not good at taking naps. I either don’t take naps (and as a result I’m a zombie during the day), or I fall asleep and I wake up about 6 hours later. The days and nights have become blended, and the days have become a bit hazy. To keep my sanity, I decided to just go with the flow and take every day as it comes. This basically means I haven’t been posting and/ or blogging much, but I have been knitting. I haven’t been spinning at all, because apparently I can’t keep my focus up long enough. I need to be entertained while my hands work, so knitting and netflix have become my best friends at the moment.

Anyways, this rant is not meant to be a rant, but it’s an acknowledgement of my current state of mind 😛 I miss blogging, I miss being active and I really miss being out of the house. I miss driving, oh MAN I miss driving! But most of all, I miss sleeping on my stomach and not bumping into anything and everything haha. I’m NOT being ungrateful, I really appreciate everything that comes with it, but after 40 weeks, I’m also really looking forward just rolling over in bed.

I’m sure you’re here for some knitting content, so let OP deliver 😉 As you can see I have a new layout and at the moment I’m working on getting the pages right. I’ve made a portfolio page for the patterns I designed, and I’m working on getting the FO’s per year pages up. I always thought I’d never do this, but I’m thinking about removing/ restructuring some of my old posts. Maybe even archiving them. At some point I used a flickr app to insert pictures in the posts, but I’ve stopped using it because the program inserted certain code into my posts which added a lot tags I did not want my blog to be associated with. Unfortunately, all the images I added now need to be relinked because the program used the flickr id numbers instead of the image urls, which is why the images before October 2012 don’t work.

This is one of the things I’ve been working on. I like to have an organized blog, and at the moment it’s still a bit of a mess. 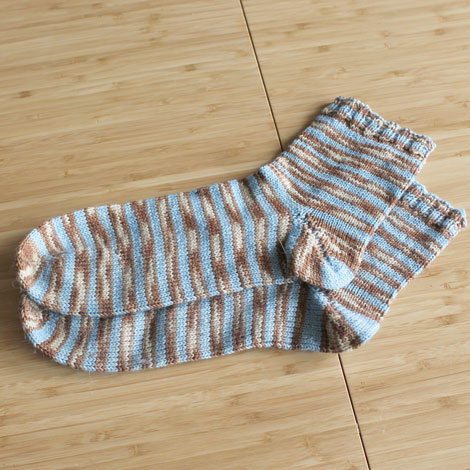 Finished objects: I have them! I started these socks in October 2014, and I don’t believe it has ever taken me this long to produce a pair of socks. I absolutely love the yarn (Dutch Wool Diva’s colorway of the month “Oldfashioned Tasty”), and I wanted to make stockings. So I got myself two hanks of these and started knitting them toe up. I have never really finished a fitting pair of toe-up socks in my life, so I don’t know what I was thinking. The reason behind the toe-up idea was to be able to use all of the yarn. I also didn’t want to have to knit the foot or toe with another yarn so I decided that toe-up was the way to go.

Now here’s the interesting part. It actually fit, but I wasn’t really happy with it. I love the slip stitch heel I always knit when working cuff down, and I just didn’t really like the feel I guess. But it did fit. (soft off).

Please excuse the potato quality, I only have instagram pictures of these phases. As you can see the yarn still produces lovely stripes, so I was insanely pleased! Then I got to the decreasing part and I didn’t really know what to do. I’ve never knit stockings and my brain was still not working, so I decided to wait for a ‘better time’. My brain just got worse and worse, and I really wanted to finish these socks now, so in the end I decided to frog it and just go with a toe-up, two at the same time, magic loop approach

Some knitting friends of mine knit both socks at the same time and they convinced me to try the fish lips kiss heel pattern. I must say I’m really impressed! The pattern is really well written and the math is very math-y. The good thing is (if you don’t like knitting math) that you don’t have to look at the math. Just accept that you have to do what the pattern says and you will be just fine.

As you can see the socks turned out fine, even though I had to say goodbye to my beloved slip stitch heel. I usually knit those out of habit anyway, and because I felt like I’d need extra fabric at the heel. To be honest though, my socks have never worn out at the heel, they always wear out at the ball of my foot, so maybe I should consider doing a slip stitch bottom instead of a slip stitch heel anyway… 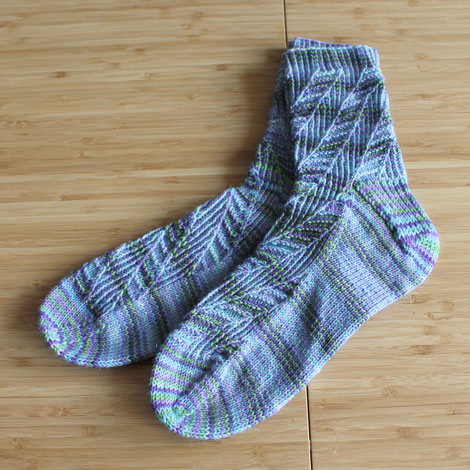 But wait! There’s more! I finished another pair of socks! This one started out with somewhat of a story as well (I think I’m spotting a theme here).

You see I wanted to thank my cousin for being awesome and seriously helping me out with a lot of the baby related things. So I decided to knit her 3 pairs of socks.

I knit here this pair first:

The second pair of socks was a maelstrom in Hedgehog fibers yarn. I absolutely love this yarn and I felt the combination between the greens and the rust brown was amazing!

I really love the difference in pooling between the left and right sock. I still have two hanks of this yarn left and I really can’t wait to cast on for something. I just don’t know what yet.. I’m sure it will tell me what it wants to become at some point though.

For the last sock I wasn’t sure which pattern to choose. I started out with Scheherazade’s slippers because they’re so princess-y, but I wasn’t sure about the yarn/ pattern combination.

I love the yarn and I love the pattern, but they didn’t really work out the way I had hoped. I decided to move on to lines3x instead. It’s another pattern I’ve knit before and I really like the effect.

While finishing the other projects I also found the time to start a new pair of socks. Harlequino is one of the coolest sock patterns I’ve seen in a while. I personally found it very easy and the pattern very clearly written, I would still like to point out that you should not attempt this sock unless you’re a very confident knitter. As long as you follow the instructions, you should be fine 🙂

The sock is built out of diamonds. You start with one and pick up stitches to add more diamonds. All of the stitches are cast on using the crochet cast on, so you’ll end up with live stitches and NO seams at all. The designer is a genius for sure! 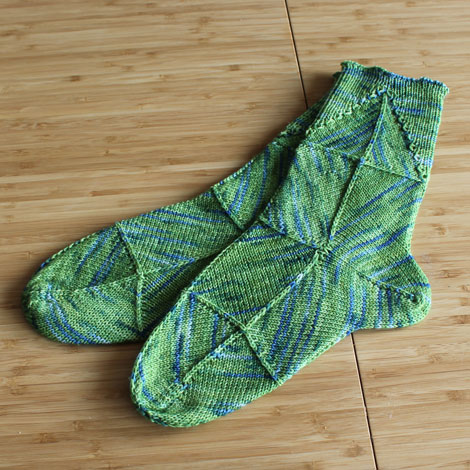 I really like this sock pattern and I’m very happy to now own a pair of Harlequino socks in Fierljeppen by Dutchwooldiva. It’s not a sock I’d be knitting every time, because, though entertaining, it is a bit of a hassle to constantly cast on and pick up stitches. Still, these socks are very much worth it!

There’s still a lot of things I’d like to show you, but this post has become a bit picture heavy, and very much sock oriented. In the spirit of keeping things organized, I’m going to keep the topics separated 🙂