by re-using fabrics. I wanted to start with something simple and cheap. Simply because I don’t know how much I’ll actually like it, and I don’t want to buy nice and pretty fabrics until I’ve made at least one simple quilt. So this will be my practice quilt. I decided to use some of the old jeans I had in my closet. They were either too big or worn out, so I decided to use what’s left of them for my first quilt. I also had a stack of jeans the BF didn’t want to wear anymore, so I decided to use those as well.

What I’ve already noticed about this quilting business, is that you really need to think ahead. At the moment I’m just practicing with my cutter and I’m just trying to get some nice 3″ squares. I’m happy to say that it’s very similar to cutting forms out for architecture models, but it still puts a strain on my wrist. I think it’s either because I’m using a rotary cutter that is too small (I bought the smallest size…..), and second it’s probably caused by the denim fabric being quite thick. I’ve been trying to pay attention to my posture, but that could have something to do with it as well. 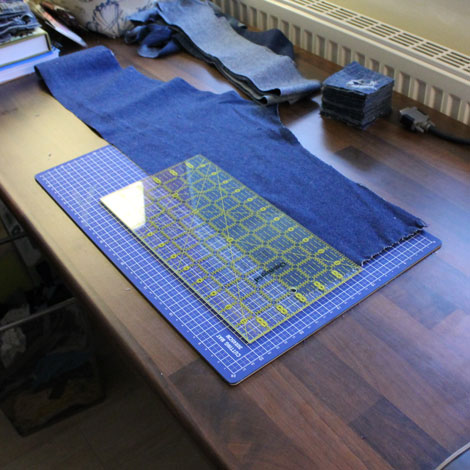 Today I’m taking a little break from the cutting so I can let my hand rest a bit. I do believe that the cleaning, boxing and unboxing of stuff plays a big part as well. I’m using my old cutting mat (which is in cm), and a new quilting ruler (in inches). So far no confusions, but it’s important to keep taking breaks. 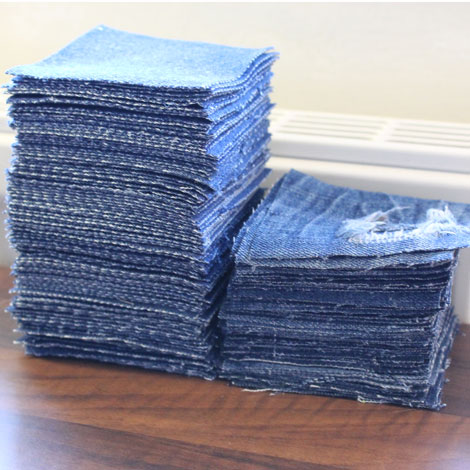 I like how the stacks are growing. I chose 3″ squares because I only had size 10 denim jeans at first (my size), and then I found some other (larger) sizes. I’m already used to sewing, so I don’t mind the small size, but I really didn’t want to go any smaller than this. On the other hand, I couldn’t go any larger than this, because of the size 10 jeans. 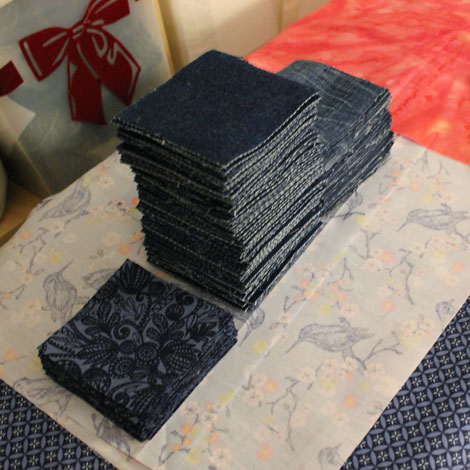 By comparison, the fabric I bought to use as a contrast/complementary fabric (the stack on the left), gives me much less. I’m still very happy with the amount though, it’s a thinner fabric to begin with, so I shouldn’t really compare them. I can’t wait to have all the squares cut out so I can play with the design. I’m still a gamer nerd and I’d like to make a monochromatic version of a scene from Zelda’s Link to the past game. I think it will like nice in blues. I’d like to add some pinks and purples for the hearts and rupies 🙂 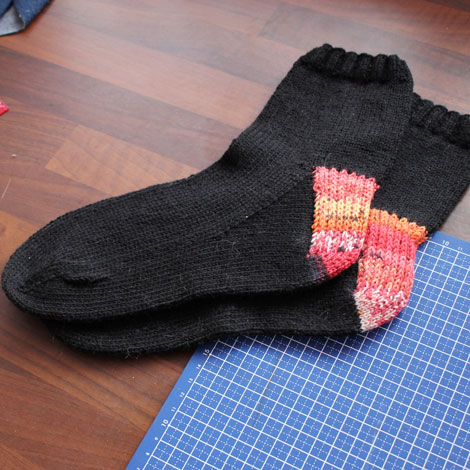 On another note: I finished my “Party in the back” socks and my own vanilla socks. This should actually be an FO post, but I’m too excited about the quilting (sorry). These socks were knit using 2.75mm needles and a Schoppel-Wolle sock yarn. The cheery colors are leftovers from my vanilla sock. I used Drops Fabel sock yarn in 543 Red Orange. 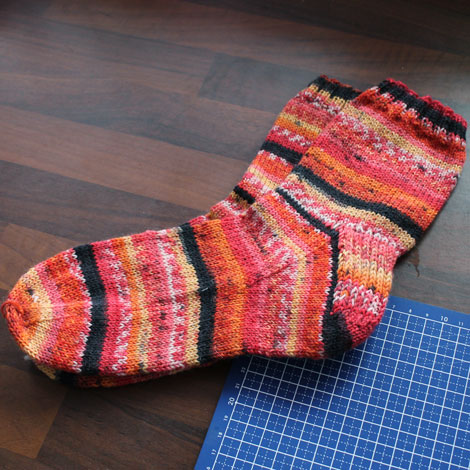 I still need to weave in the ends on the vanilla sock, but it was still wet (I usually weave in before I wash them, but I completely forgot…)