This World Cup is killing me. It may not be a surprise to hear that I’m a very big fan of the Tour de Fleece, but not much of a fan of the actual Tour de France. The World Cup on the other hand is something I can get excited about. I don’t usually follow soccer/ sports at all, but there’s something about the World (or European) Cup matches that I love. It reminds me of the times that I was a kid and we would all sit down and watch the matches together.

I had plans to updated a new design this week and to look for test knitters, but I was counting on being able to knit while watching the matches. I can’t. The matches are really fun to watch, and even though I can knit and watch, I kept making mistakes so I switched to some lighter knitting (sock and scarf).

I’m hoping to have it done by next week, but I’m not promising anything haha. I’m following the matches and my sleep pattern is a bit less than ok at the moment. 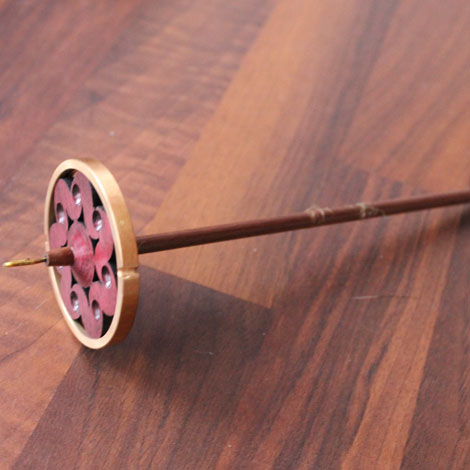 I bought this spindle for my moms birthday in April. My mom got really interested in spinning, but I thought it’d be a little too crazy to start off with a wheel. I do think that it’s important for a starting spindler to start with a very good spindle. I’ve tried a few spindles myself and I believe this golding is the best I could get her for her birthday. She has issues with her shoulder so a lightweight spindle was important. Also, even though I love Turkish spindles, the process of winding the cop can be time consuming. (This is due to my own obsessiveness of making pretty cops and by no means a reflection on Turkish spindles). 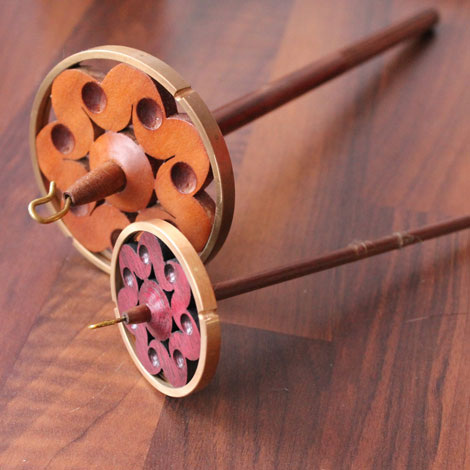 I believe mine is a Walnut 3″ Tsunami and my moms is a 2″ Cherry Tsunami, but I’m not sure about the type of wood. I have it written down somewhere.. I really like how they look so much alike, but the 2″ version is so much smaller.

I usually order some fleece/ fiber before the TdF and this year is no exception. The only thing that is really different this year is that I have my own fiber to spin as well! So far I’ve saved up all the clippings of Bam and Zuzu, but I’m not really sure about what I’m going to do yet. 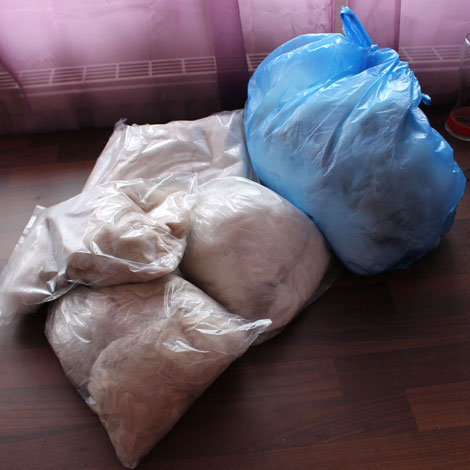 This is (I believe) half of what I’ve saved up from the clippings. I have two tiny (dwarf?) angora’s so they produce a bit less than a regular sized angora. The advantage, however, is that I can clip them every two months instead of every three months. In these two months the bunnies ‘grow’ to nearly twice their actual size (because of the hair), so I’m not exactly sure how much less fiber they produce. I usually get about 150 grams to 200 grams of clipped hair from my biggest bunny. The smaller one gives me about 50 grams less on average. That’s still a lot of bunny! 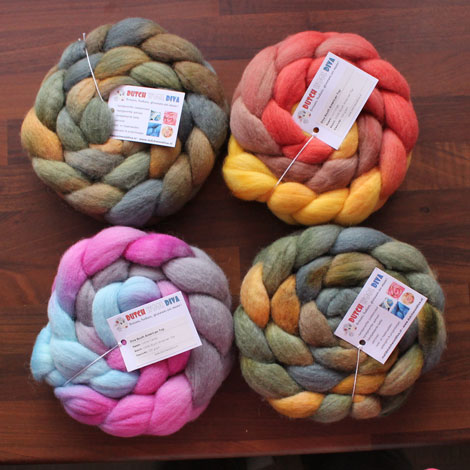 I remember seeing something on Diva’s blog last year about a camel blend, so when I saw these I knew I had to try them. I’m still expanding my spinning knowledge and spinning different fibers is a great way to learn about their characteristics. It’s actually one of the most important things (imho), because the fibers characteristics will determine what the yarn (and eventual product) will do and how it will behave. You can’t expect silk socks to behave the same as BFL socks. 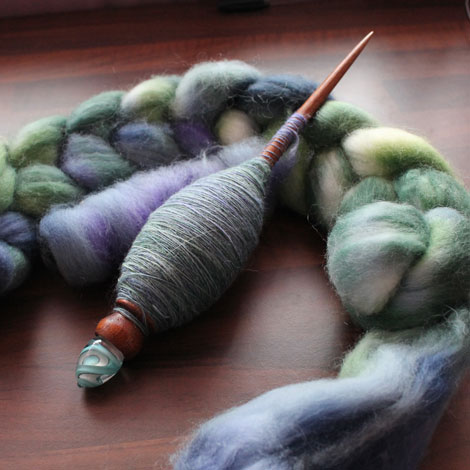 Meet Alliser. He’s still not done, but I’m working on it. I’m planning on finishing this as a ‘warming up’ for the actual tour. I just simply LOVE the spindle (and the fiber) and they both match as if I color coordinated them. I haven’t had time to sit down and spin for a while (also due to problems with my right hand/ wrist), but I’m going to finish this so I can get in the mood for some TdF (while watching some WC). I’m going to take the smartest road and start a new cop. This one is getting heavy and it’s really not good for my wrist/ hand to keep spinning like this (which is why I stopped spinning in the first place). 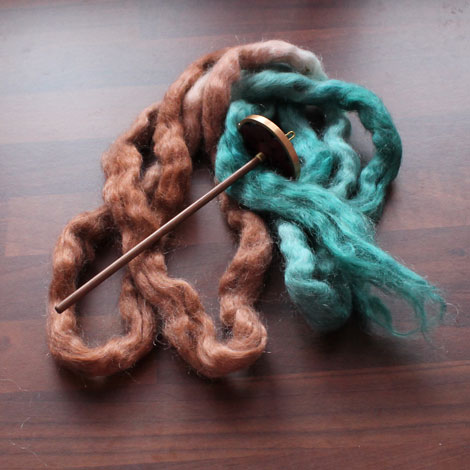 I’m planning on spinning 100 grams of kid mohair with this little spindle to try it out. I’m thinking of spinning the blues and brows together and then plying them for a complete barberpole. I’m usually not a fan of barberpole at all, but I think it might be a good idea to try it for once. (again I’m still not sure.. what do you think?)