It took me so long to write this post I’m already done. No FO post today, but still a nice update 🙂 I finshed the warming up socks last night and I love them! While working on these socks I learned a few very valuable lessons I’d like to share with you.

I’ve always been a lazy sock knitter. The idea of casting on more stitches and moving down a size was unthinkable. The interesting thing is how much pride I took in being a lazy sock knitter. It’s like a kid half-assing highschool and boasting about it. Which, incidentally, is exactly what I did during highschool. I half-assed everything and had the least amount of exams of anyone in the entire school, and I felt so good about myself haha.

So here’s the thing. The pattern calls for a 2,25mm needle and the last (and only) time I actually knit socks on a 2.25mm needle was when I was knitting my skew socks. I hated the process so much that I decided I’d never knit on 2.25 needles ever again. But knitting this sock was a completely different experience. Apparently I don’t like knitting socks on steel needles. They hurt my hands because they’re not as flexible as wooden needles. The tips of the needles I used when knitting Skew were too blunt. It was a real chore to knit with those needles and on top of that the yarn was handspun and too tightly plied so there was hardly any flexibility at all.

All of this gave me a good dose of hesitation every time I wanted to knit socks with 2.25mm needles.

Another thing I really learned to appreciate was the pattern. It was engaging and different than the socks I’ve knit so far. I guess now I know that the main reason I stopped knitting socks wasn’t that I didn’t have time or didn’t like to knit socks anymore, but I had unknowingly placed a limit on myself and I was just getting bored of this limit. I was only ‘allowed’ to knit with 2.5mm and I was only ‘allowed’ to knit vanilla socks. Boring! 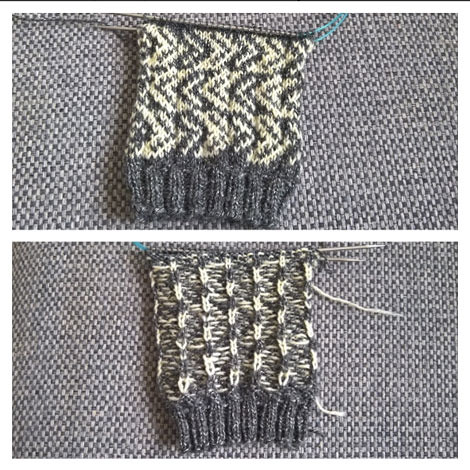 I usually didn’t do colorwork knitting on socks either, because to me it felt like the process would take a lot longer. I think it actually happened: I became a process knitter instead of a project knitter. Who would’ve thought. I guess growth is always possible <3 Anyway, back to the knitting. I learned the Jacquard ladder technique. I think it’s not really suitable for this particular pattern of stranded knitting because the floats aren’t that big, but it was nice to practice with it anyway. The idea is that you use the double knitting technique to ‘double knit’ the floats. So you pick up an extra stitch on the inside and purl it from the right side, as you would do with double knitting. This technique is so much better than the twisting the float around the working yarn technique I used because it’s really invisible. I knit this one too tight, so you can still see indentions on the right side, but the second sock was much better already.

I still think that this pattern isn’t suitable for this technique, and in future I’ll only use it on longer floats, but a whole new world of socks just opened up to me, because honestly knitting a sock inside out kinda sucks 😛 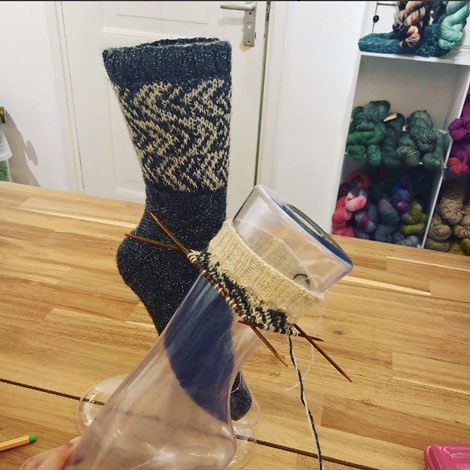 I was going for a set of mismatched socks because they’re for DH and he always wears mismatched socks. It’s become a thing and I’m going to be knitting a lot of mismatched/ fraternal socks because I read that people who wear crazy socks are awesome (or something in those lines). Apparently it’s a trait that most creative people share. I’m personally not one of those people, but I guess I can live with fraternal socks 🙂 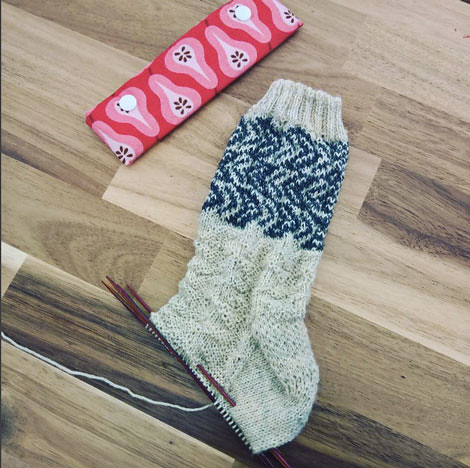 Now I don’t know if this is true or not, but I’m going to choose to see this as an act of inner and personal growth. I’m blogging this and I don’t have perfect FO pictures. I just have the documented process on instagram and ravelry. I haven’t even washed/ blocked the second sock and I’m already doing this. 2012 me would die of shock haha.

Another thing I learned about myself is that, even though I don’t have problems with second sock syndrome, knitting fraternal socks is:
a: a lot of fun because it feels like a new sock all together.
b: is more yarn efficient, because I used 2 50 gram bals of yarn and otherwise I would’ve needed another ball of charcoal invicta extra to finish this pair. So much more efficient.

So I joined Sock Madness 11 and I can’t wait for it to begin. I don’t even care if I’m out of the race in the first round. I’m going to participate for the fun, the learning experience and to bask in my new found appreciation of the process of sock knitting. As a tribute to sock knitting we launched our first ever own handdyed sock brand: Sticks & Cups Socksanity. Why you ask? Because I want to knit socks dammit. That’s why <3

I honestly don’t mind the shameless plug, but I’m so incredibly happy with them!