I knew I had posted something about socks and how much I like them (many times actually), but there was this post where I had listed a few of my failed attempts at socks. I couldn’t find it (what else is new..) and I spent too much time finding it (actually it only took me about 5 or 6 minutes; which is still too long when you consider the keyword ‘sock’ did not turn up this post). For the people who are interested: it’s this post. Don’t worry, I’ll wait 😉

I wanted to do a recap of the process of learning to knit socks. Looking back, I realize that most of the issues I had with socks is that I didn’t understand how elastic a sock should be, fearing that my socks would become too loose (like nylon socks can get after too many washes). I didn’t realize that woolen, hand knitted socks really behave differently (you also wash them differently, so that may have something to do with it as well). it has come to my understanding that elastane tends to lose it’s stretchy properties when you wash it with fabric softener, which is why you should never use it when you wash your undies and/ or bikini’s. This, I believe, also holds true for socks, as there is elastane in them too. (I could be wrong tho, I haven’t done any scientific research 😉 ) But I digress..

I learned that it was much easier for me to just knit socks top-down, starting with the cuff and ending with a grafted toe. The most important thing I had to learn was the importance of yarn. I obviously understand that it’s not always possible to buy the ‘best’ yarn for a project, because, in all honesty there is no ‘best yarn’ anyway. If you have a lot of socks, it’ll take longer for a sock to wear out. Simply because they won’t be used as intensely as when you only own 2 pairs of socks. 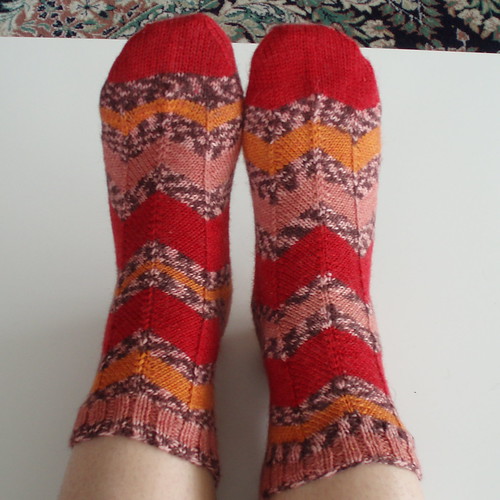 The socks I wore until they were threadbare were my first Jaywalkers. I absolutely love this pattern and I’ve knit a pair for my opa, using my own handspun yarns.  It’s not that I’m too good to darn my socks, it’s just that I noticed when I had a huge cold patch under my foot one day. I hadn’t noticed it at all until there was a hole the size of a tennis ball under my foot (either I have no feeling in my foot, or I’m stupid). I choose to believe that I was so incredibly in love with these socks that I subconsciously chose to ignore it until it was too late, not a great move in hindsight.

I know they don’t really match (the colors) but I didn’t care! These socks were so incredibly comfy, and they never sagged! So why did this happen? Well you might have guessed that I used to wear these socks nearly every day. I washed them and dried them of course, but once they were dry I’d put them on my feet and go. I don’t think these socks have ever really seen the inside of my sock drawer.

Yeah, don’t do that to your socks. Socks need little vacations too! My poor Jaywalkers were overworked. Another reason (also very important) is that, because I’ve been a poor student for a long time, I didn’t have the means to buy ‘good’ sock yarn. Not to be judgmental about yarn, but a sock yarn should be tightly spun, and this yarn was not (even though it was advertised as sock yarn). I know it sounds like I am, but I’m not complaining. This sock yarn cost me 1 euro per 50 grams. Considering how much I paid for this yarn, it was very good. 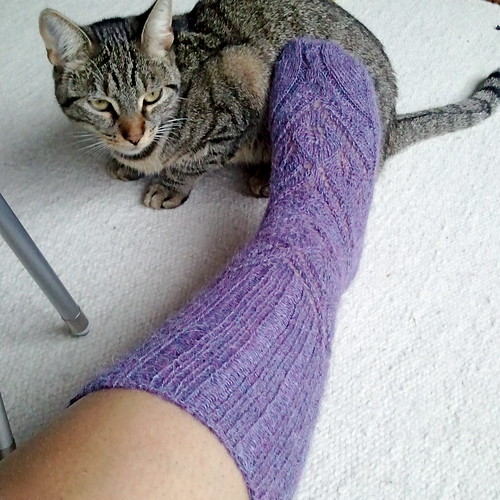 Another yarn that won’t make a good sock yarn is drops alpaca. It’s not advertised as sock yarn anywhere, so I’m just sharing this information for no good reason. It’s ok if you’re going for bed socks, but if you’re planning to actually wear these socks while walking around, it might not be a great success. 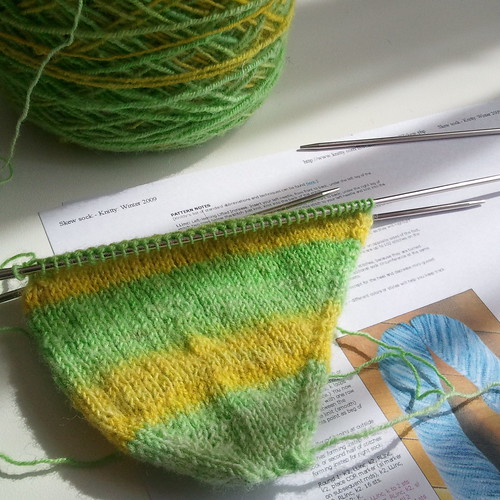 Your second handspun yarn ever will not make good sock yarn either. As you can see it will be too ‘imperfect’. It will start out thin at the toes and end up bulky at the cuff. You’ll kill your fingers and wrists trying to move the 2.25mm pens you needed at the beginning. It’s not going to be pretty. Just don’t do it. Use that yarn for a project that won’t be abused as badly as socks. 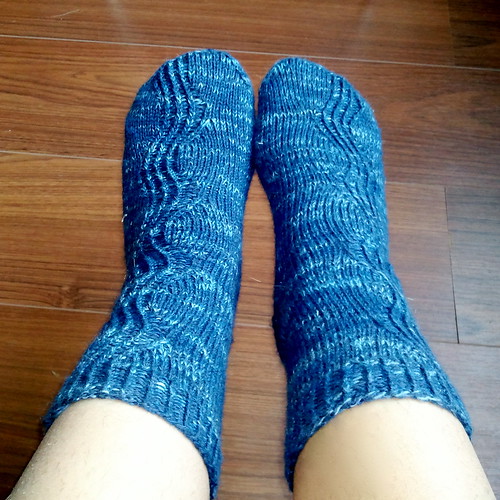 Don’t use a yarn that tends to shrink/ felt. I needed something heavier than the yarn I had so I used some cheap (but nice!) sockyarn and held it together with some leftover malabrigo lace in oceanos. It was gorgeous (maybe I’m biased but I still love this picture!). My Kalajoki socks were my favorite! Unfortunately, they were not to last. Within a year (of not even , wearing) they shrunk. The malabrigo is not made for sweaty sock syndrome, so it shrunk and felted. Bye bye Kalajoki. I still need to knit another pair of these socks. 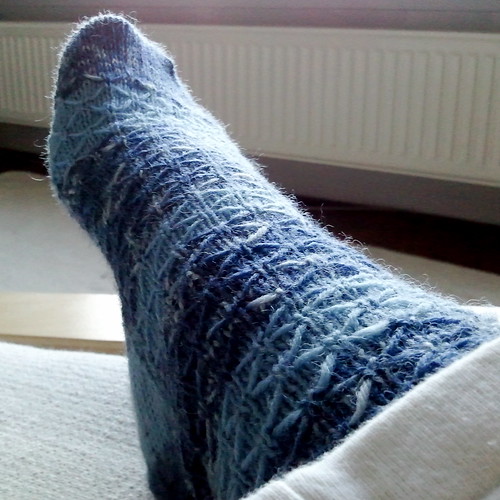 Here’s my Leyburn socks, made of the same cheap 1 euro yarn I used on my Jaywalkers. So what’s the difference? Why mention the same yarn twice? This sock was knit for the BF, while the other sock was knit for me. My sock was worn nearly every day for more than a year, and this sock has only been worn by him for 2 week every winter. There’s some fluff and it’s gotten a bit fuzzy in the back, but so far it’s holding up very well. The sock is intact, shows no sign of any wear and tear (on the bottom, toes or the heel), and is still in use (by me, I’m ashamed to admit lol).

So I guess I’d have to say that the yarn was not the problem. I was the problem 😀 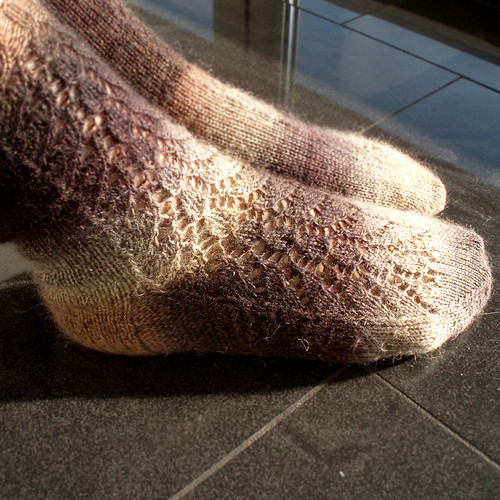 Blackrose, another pattern i’d like to reknit because I ‘lost’ the sock to my poor choice of yarn. Drops delight is NOT a sock yarn. I know most of you sock knitters already knew that the moment you touched it or even laid eyes on the yarn. I was not experienced enough to realize this, so I’m sharing this with you, the internet, in case you are as inexperienced as I was. Drops delight, or any kind of pretty SINGLE (unplied) is NOT a good yarn to choose for your socks. Again, it’s ok if you just want to use them as bed socks, but this yarn was not made for abuse.Don’t get me wrong, I’m very careful with my socks, but they will get abused. They’re worn in shoes, stepped on, rubbed and often have to deal with sweaty feet. Imagine treating your beautiful lace shawl that way and imagine the horror. Drops delight is pretty, squishy and nice for everything BUT socks 😛

I’m working on organizing all of my Flickr photo’s, my Ravelry projects/ stash/ handspun and my blog. Apparently Flickr either heard me or read my blog because they added some new features that make editing pictures a whole lot easier. When I started out blogging, 6 years ago, I was very good with tagging and using keywords, at some point during the process I just stopped and everything went to ….

I now need to organize about 10.000 photo’s on my computer (because some of them are on flickr and some of them are on rav, but I don’t have everything tagged and I can never find anything). I need to organize my blog, because if you scroll down until you reach 2012 you’ll see that all of the pictures are missing. I used a flickr plugin, because I thought it’d be easier than the wordpress version (silly me), but later on I learned that the plugin was adding extra code into my blogs that added x rated tags. So I deleted the plugin, but now I have to re-add and edit all the older pictures in all the old posts.

This is why I started writing about how long it took me to find something. Last week I was visiting my mom and I had brought my little granny squares so I could finish my kirby blanket (picture is in the previous post). I had laid out all the squares and took a picture a while ago, and then all of the squares had become disorganized and I had ‘lost’ the picture of my blanket. I spent 2 days (no joke) looking for this picture, because I *knew* I had it somewhere but it wasn’t on flickr and I couldn’t find it in my pictures.

I finally found it because I remembered it had been saved on my old macbook and I had made a backup of all the pictures. After 2 days. I realized that this was only going to get worse. A few years from now this laptop will become obsolete as well and I’ll have another backup and then another and another and in a few decades my life will be a jumbled mess of hundreds, maybe thousands of memories that I can’t find. And make no mistake. I’m a blogger, and as such I take a LOT of pictures. You don’t get to see most of them, because most of these pictures either don’t turn out the way I like them, or whatever, but I keep all of those pictures because I might need them some day. Maybe not to blog, but for myself. To see how a project or pattern is progressing, notes for myself if I ever want to reknit this project again. There’s also a lot of personal pictures, a LOT of cat and bunny pictures I’m not going to torture you with. So I need to get this stuff organized because I’m not spending another 2 days looking for some  CURRENT WIP project picture.

I hope your life is much better organized than mine!

2 thoughts on “sock stash #2 and (the never ending) organization of yadda yadda..”