well not really, I was just getting ready for summer! Contrary to popular belief, life is not only about knitting and fiber related stuff. There’s gardening and cooking involved as well. You may know how much I love gardening, but you may not know about my endless love for food and cooking. I love to cook, and summertime means barbeque time if you ask me. There’s spinning, gardening, cooking and a lot of eating involved. 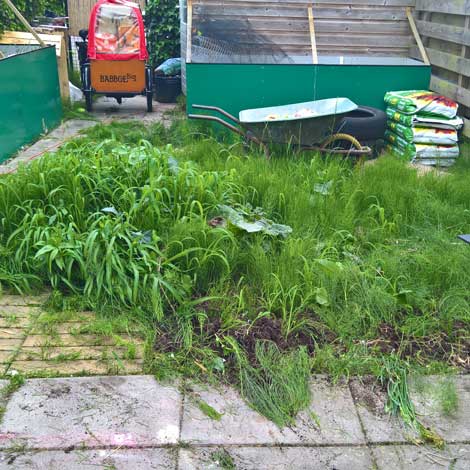 Which is kinda hard if your backyard looks like this.. So I went to work. 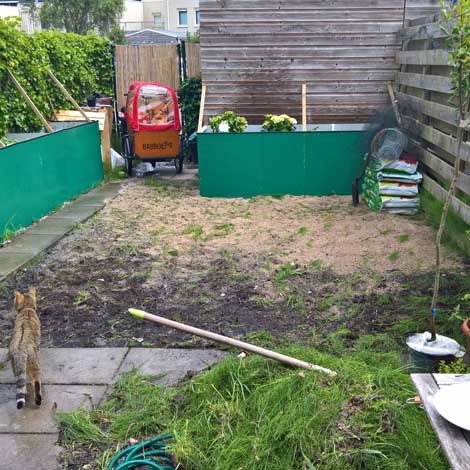 It took me a total of three days, but it was totally worth it! The name of this monster? Horsetail. I’m not sure if you know what it is, but it’s hardcore and impossible to kill. I would like to have some grass, so Ma’iq can play outside. So far all of it is gone, but it will grow back soon enough. I’m going to have to keep workin on it but it’s a lot easier to do now that most of it is gone. 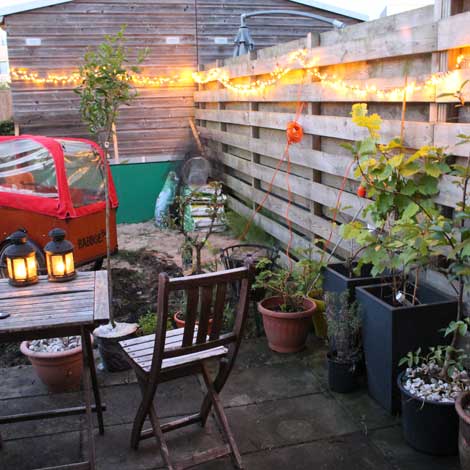 I’ve never had a garden so I honestly didn’t know how much faster things grow in a garden compared to on a balcony. It’s actually very amazing to see how much ‘growing power’ mother nature has. I’ve always managed with pots and even though things grow well in pots, they grow much better in soil. It’s also a lot easier to manage things in soil (waterwise). 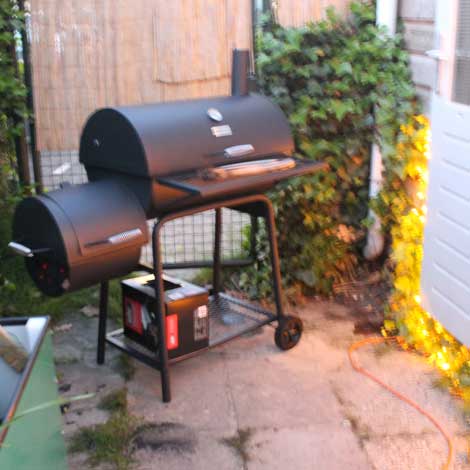 Which brings us to one of the main reasons I cleared out the garden. My birthday present: an offset smoker. When we say barbeque in the Netherlands, what we actually mean is “grill”. I love good food and I’ve been eyeing American style barbeque for a long time (with no way to actually get it). Because I always had a balcony I never even considered a smoker. I always thought that there’d be a LOT of smoke involved and you can’t rally go there when you live in a flat. Your neighbors will not appreciate something like that.

Now that I have a garden (and it’s spacey enough so I don’t have to smoke out my neighbors) I thought it’d be awesome to write it down on my wishlist. By now I’ve smoked three foods on it and I’ve learned a lot more about smoking. I know that there’s actually not a lot of smoke involved at all, and that it’s reall good eating *drool* 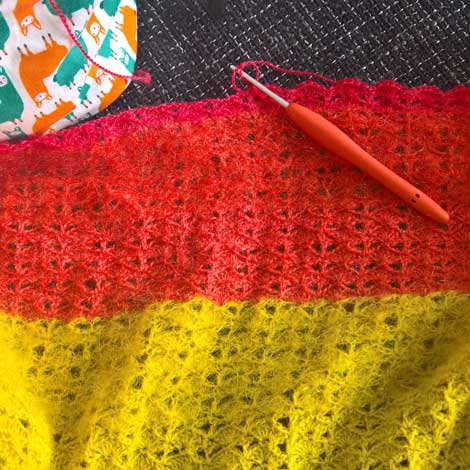 In other news, I’ve also been working on my pashmina shawl. I’ve managed to almost finish the red parts as well, but this is an older picture. I wanted to blog about all this last week, but I spent a lot of time preparing for fathers day (the first time I smoked something on the new smoker), I had to finish the yard and the seasoning and rub and whatnot and it took a lot of time. 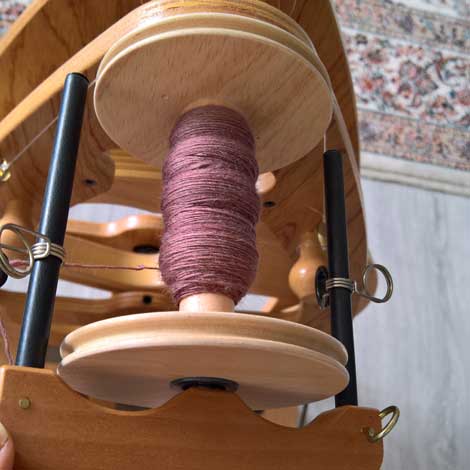 In the mean time I’ve also been spinning up some fiber! As you may remember I was spinning fiber for a baby blanket for my cute nephew Milan, but at the moment I can’t for the life of me remember where I put the rest of the 150 grams of fiber. So in order to refind my spinning mojo, I’m working on the first 100 grams of Sheherezadeh. This will not be a baby blanket, since Melina’s oma (my MIL) made an amazing and large baby blanket for her. I’m not sure what it’ll be, but I’m sure it’ll come to me in time. 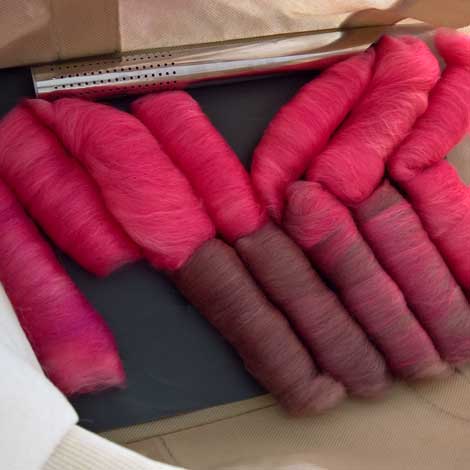 I spent some time making faux lags (which I find to be very relaxing), and started spinning. I’m going to spin two of them in one direction and the last one will be spun in reverse. This way I’ll end up with a barberpole I guess, but I think it’ll be nice 🙂 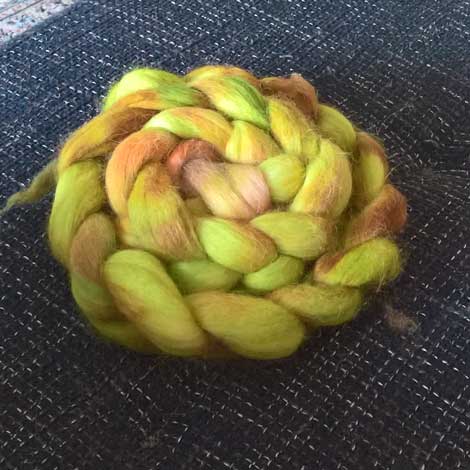 I’m probably not the only one who’s brain works like this, but I’m always scared I’ll run out of fiber/ yarn. So I always have way too many backup plans and I don’t know what to do with my life 😛 So to celebrate Tour de Fleece 2017 we decided to dye some fiber up for the shop. This here is 100 grams of soft alpaca dyed in colorway “Artemis”. For now it’s just an experiment, but if it turns out to be popular we might dye more 🙂 This batch is mine to experiment with though. I have 300 grams, so If the 300 grams of sheherezadeh and beach bum are through I still have something to look forward to. I have honestly no idea what to do with it though. 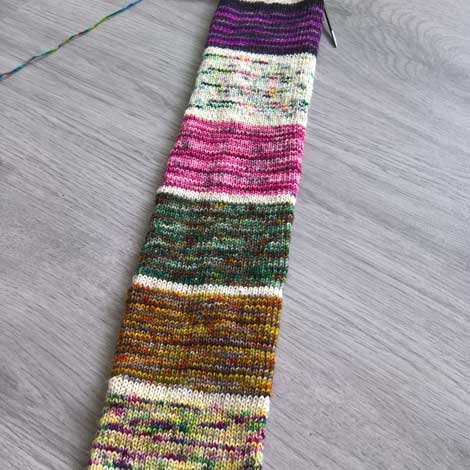 Last but not least, I’m working on the mother of all socks. Which is not a sock at all. This is a sockswatch made with all the colors of our own handdyed “socksanity” yarn. I was so incredibly curious to see what each color looks like, and I think I’m not the only one. Sometimes I see people looking at the skeins of handdyed and I can hear them thinking: “I wonder if I’ll like this effect”. And so it began. The numbers of colors keep increasing (for some reason haha) and even though I like each and every one of them, I can imagine not all of them will be appealing to every body.
This way I hope to take away some of the mystery and allow people to see what it would look like in a 60 stitch sock knit with 2,5mm needles. I’ll make a swatch for crochet as well, but I’ll need to finish this one first.

What are your plans for July? Tour de Sock or Tour de fleece? 🙂