I have an extreme case of it this week. I’m normally a very happy and smiley person, but this week it’s all about the resting bitch face syndrome. So I went to the dentist on Tuesday and my dental hygienist had a little too much fun on my teeth. It hurt a bit at the time, but I sucked it up and moved along, but as the day progressed the pain got worse. So what happened..? It’s not the teeth, it’s the muscles around the jaw, when I’m stressed out I tend to strain the muscles around my jaws and end up with a lot of pain for a few days. I know it’s not the teeth (because I had my dentist check and re-check). Apparently it’s something mostly women are afflicted with.. I don’t grind my teeth, but I do tense up the muscles and then this happens. So this happened while I was at the dental hygienist and I was dying the past two days. Today it’s a LOT better, and I haven’t taken any paracetamol. Normally I’d simply take an advil and the pain would just go away, but I can’t since I’m breastfeeding so I’m stuck with paracetamol and this stuff doesn’t work like advil does 🙁

Next time I’m taking the rotten advil and I’ll give Ma’iq a bottle instead rather than deal with this for three days, but I guess you have to learn the hard way sometimes. I really thought It’d get better, and then it didn’t 😛

Because of this I’ve mainly been working on the ten stitch blanket, because I seriously couldn’t do anything else. Another thing I noticed is that, apparently, when you’re used to smiling a lot, not smiling can actually make you grumpy. I was in a very nasty mood the last few days, and now that my face is going back to its happy self, maybe I’ll go back to my happy self as well! 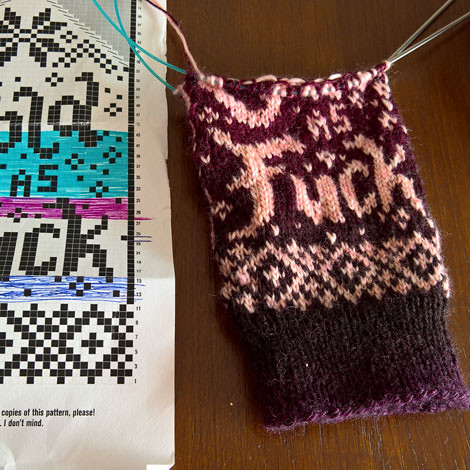 Even though it’s actually a very small project, this thing seems to be going on and on forever. It’s actually not though, it just appears that way because I haven’t really been working on it that much. 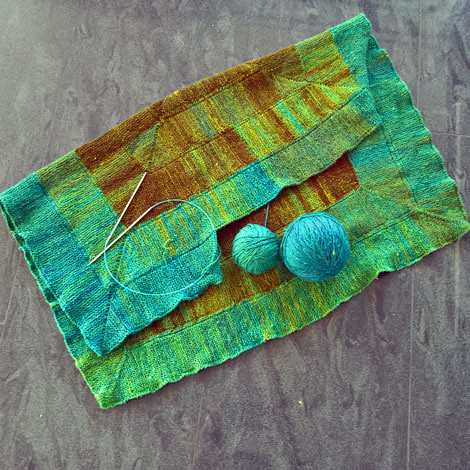 What has been growing is this blanket. It’s nice to have a total brainless knit and if it means this blanket is getting finished instead of the mittens than I’m actually going to be very happy indeed. I love how the second ball is shrinking compared to the third (and last) ball. I love how the colors are moving along and how the olive green still comes back sometimes. I love how it’s working out the way I hoped it would. I love how I can find nice things to say about this project as well, even though in reality the past few days everything about it has been bothering me immensely.

For a moment there I hated the corners so much I wanted to frog the thing… I’m glad I didn’t, and only because I was too cranky to wind the balls again hahaha. I can’t believe how bad this week started out.. man. 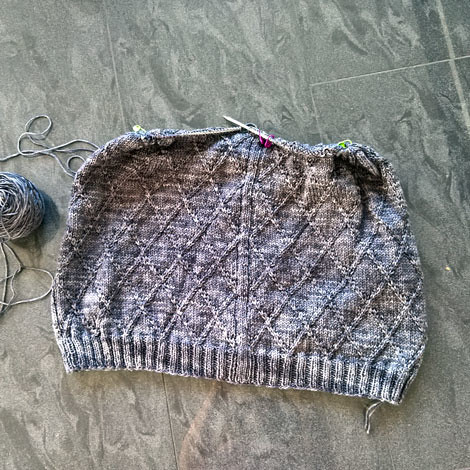 I just know for a fact that it’s going to be steeked, but other than that.. so many options. For now I’m going to get myself a cup of coffee and continue my love affair with the potty mouth mittens.. <3