It’s there! but it’s a bit slow at the moment. This post was supposed to be published two days ago, but that’s when my kitty Noodles disappeared and didn’t come back home. Maybe your kitty does this too, but it’s very out of character for our little Noodlekitty. She always checks in for some pettings and food, and then she’ll go off to play with her new kitty buddies. But this time was different. I let her out an hour earlier than I usually do (which is when most people go out for work), and most people have their cars parked on the backside of the homes, so they don’t go through the front door, but rather through the backyard. So it’s very easy for a curious little kitty to slip inside unnoticed. But then she was trapped and couldn’t come back.

Obviously we now know what happened, but we were worried sick, and we walked around the entire neighborhood and spent a lot of time searching. The next day we printed posters, asking neighbors if they would see if she’s hiding in their homes, put them in our neighbors’ mailboxes, and what do you know.. We hear a car park, and 10 minutes later Noodles walks back in and starts munching 😛 It was freezing out, but she was nice and warm (so obviously she hadn’t been staying outside. We don’t know where she’s been yet, but I’m sure we’ll find out soon enough haha.

So she returned yesterday evening and two days of stress is not good for your knitting mojo.. or anything else mojo. I feel like I need a brain massage 😛

We ordered two trackers, so if she goes missing again at least we’ll be able to track her down. It’s really sad because we get stressed out, but her little sister Kiwi gets stressed out as well. Last time (a few years ago she slipped past when we were coming home and we didn’t notice), she was lost for a night in the staircase of our appartement block. She couldn’t get out, but Kiwi got so stressed out she started peeing out of fear of abandonment. It’s really sad and it’s something that permanently changed the way she behaves. We can no longer leave her alone in our bedroom because she’ll smell our stuff and she’ll pee on it so “we’ll find our way back to her”. Poor kitty. She never pees anywhere, and no she doesn’t have a bladder infection. It ONLY happens on our bed. We have a new bed (and sheets and everything), but I’m honestly not willing to find out if she’s over it already.

Anyway, that’s why progress has been a bit slow. A lost kitty and a clingy baby will make short work of my knitting time 🙂 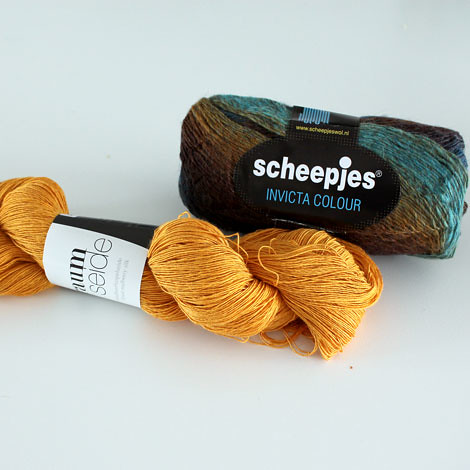 I wasn’t sure how it would work out at first, so I followed the pattern to see what it would look like. The Traumseide is 800m and invicta is 420m, so it’d mean I’d have to buy another ball of invicta. In the end I felt the other version would be better and frogged and restarted. I’m now knitting on the project below and I’m liking it a lot more. The gradients works much better this way imho. 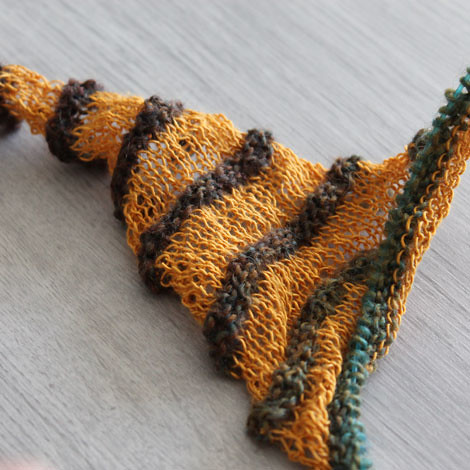 This is one of those amazingly brainless projects that’s also very enjoyable. I’m really needing my brainless knitting at the moment, so I’m really not too bummed about starting another project before finishing the ones I was supposed to finish. 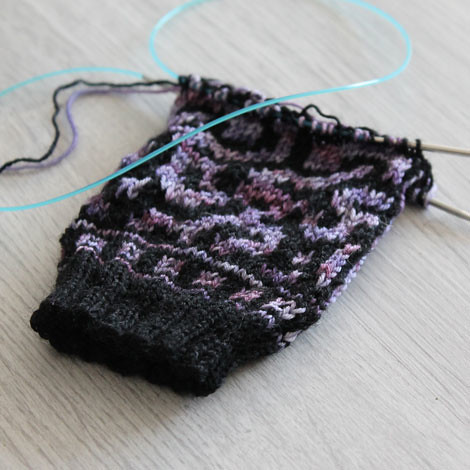 I’ve been knitting on these socks as well! I messed up a tiny bit, but you can’t see it, and I’m honesty not that bothered by it. It gives them a bit more character haha. I’m supposed to finish these by the end of this month, so I’d best hurry.. I heard my brother likes longer socks, but at least his feet aren’t that big.. I guess a normal 41-42-ish. If he’d been a 45 he’d be knitting is own socks 😛 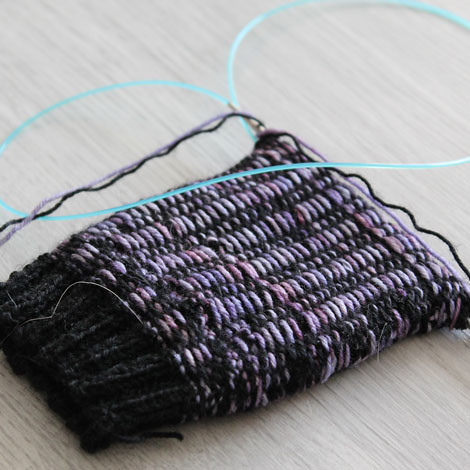 I know I can’t be the only one who thoroughly enjoys the backside of stranded knitting projects. I sometimes enjoy this side even more than the other side. I love how the floats look so peaceful and even-ish. 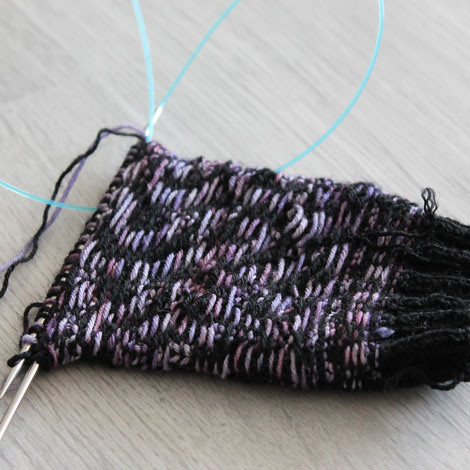 The backside of the front side (lol does this even make any sense?) is also very nice. This side looks messier because I didn’t want very long floats here, so I had to twist my yarns to keep everything snug. 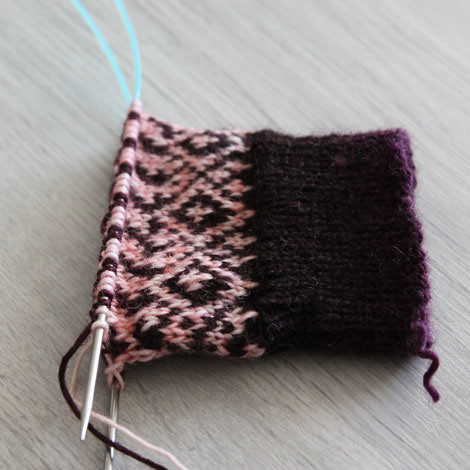 These mittens are growing as well. I still need to hurry, but this is a very quick knit compared to those socks. I’ve knit these at least twice, and they’re smaller than the socks I’m knitting. 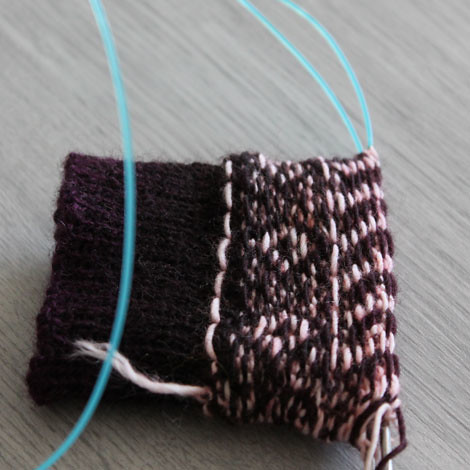 Ahh. This makes me very happy. I hate and love knitting on 2.25mm needles. I usually knit socks (and everything else on 2,5mm, but the first time I knit these they turned out waaay too big, I’ve now learned to knit all my mittens on 2,25 because apparently I have tiny hands). 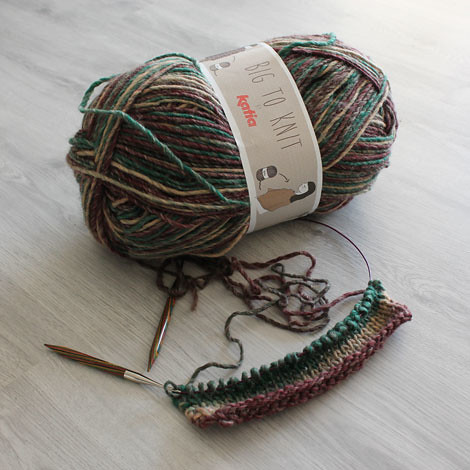 While working on all sorts of very tiny gauged projects, I felt the need to make something big. Like 9mm or 10mm needles/ hooks big. I didn’t know of this yarn, but it’s really nice and I’m really happy I found it. Did I mention our dry cleaners? Yes. there’s more yarn than other things out there, and I love it <3 I’m going to make a big poncho-ish thing for winter/ spring/ fall.. and probably for summer as well hahaha…

I bought this rather huge ball of yarn because I was depressed about my kitty and needed something to take my mind off. Buying yarn works amazingly in that sense. The monster weighs 500grams and contains 700m of yarn. On 9/10mm that’s going to be a very big poncho me thinks 🙂 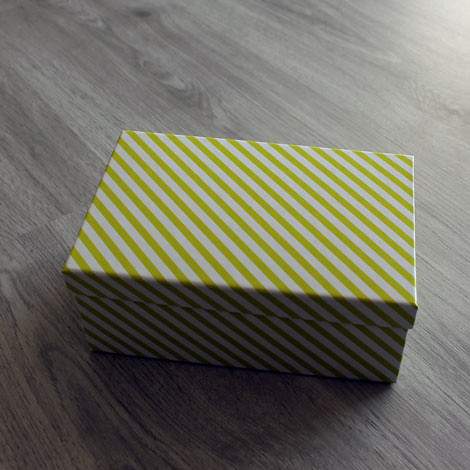 In other news: DH got me a present for Valentine’s! Or actually, I asked for it and he said “Sure go for it!”, which basically translates to the him giving me a Valentine’s present whaha. 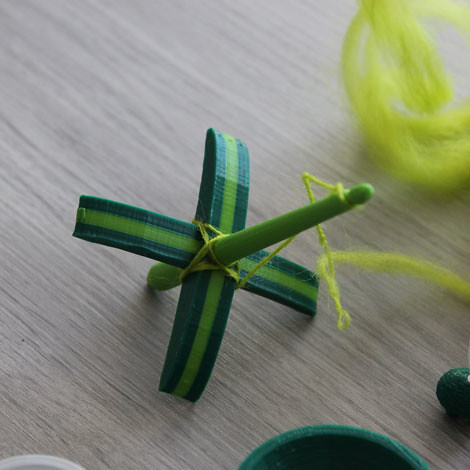 This little cutie pie is from New Age Spinning on Etsy, who sells 3D printed spindles and stitch markers. I love how you can see that the spindle is really made with a 3D printer. The box was wrapped with a ribbon, but I was too impatient to take pictures when it arrived so by the time it was picture time I had already opened the box haha oops. 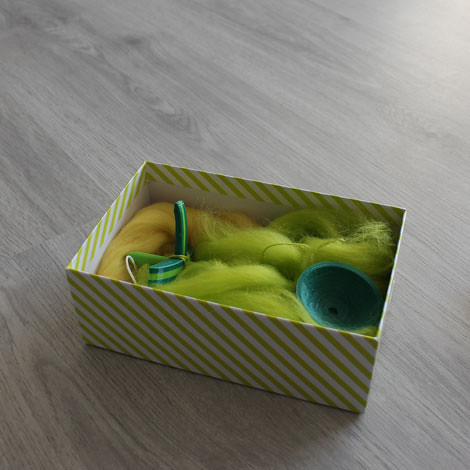 Not only was the box cutely wrapped, so was the invoice. The envelope was also cute and color themed. The owner has a lot of attention for detail, that’s for sure! 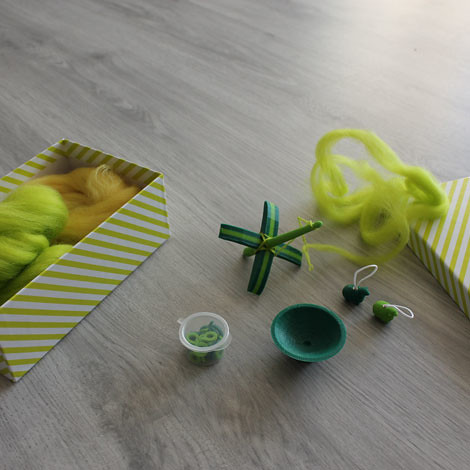 As you can see (on the closeup of the spindle) I’ve already spun a bit and plied it on the fly. What I can say is that this spindle, though it’s very tiny, it’s extremely comfortable and it’s really well balanced. One of the problems that plague light weight spindles is that they’re so light they tend to spin backwards very quickly. This spindle, however, spins on for quite a long time!

I’m going to go ahead and take today off from ‘deadline’ knitting and work on a nice poncho with my 9mm hook. Tomorrow is a new day 🙂