Oh yeah.. it’s happening to me. I can’t keep a single thought in my head and I even forget to write things down so I won’t forget them. I’ve heard its temporary and I’m just going with it, but it can be a bit of a pain. I feel so incredibly disorganized and chaotic. In the mean time I also started using the new ‘camera roll’ function in Flickr and I uploaded about 17.000 pictures. Now all I have to do is sort through all of them (by now more than 20.000 relevant pictures of the past 12 years of my life), organize them, label them, album them, tag them and whatnot.

I may have mentioned it already (but I can’t remember, see what I mean..) but I bought a ‘glasshouse’ for my balcony. It’s not that huge but it’s big enough for a lot of plants that need that extra bit of warmth and protection in our cold climate. I’ve also ordered some cotton seeds to plant, so I can give cotton planting another go. 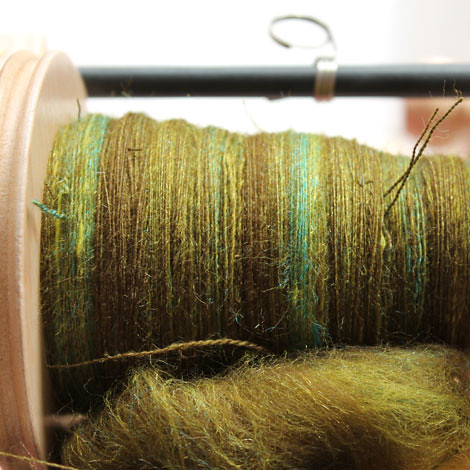 In the mean time I’ve been spinning on my wheel. By now I’ve already started working on the teal so this picture is already a bit old. I’m spinning on the fastest ratio and lowered the tension as much as possible. So the yarn will sometimes twist back onto itself, but that’s ok. 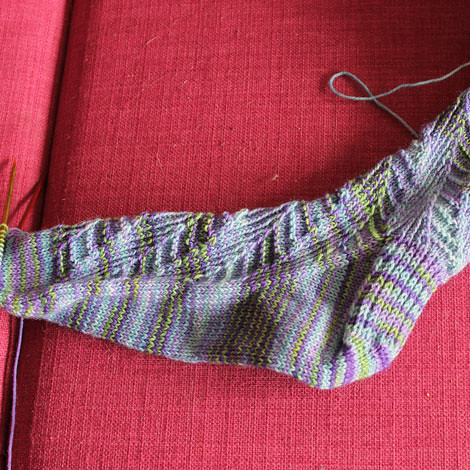 I rediscovered this sock and I’m going to finish it as soon as possible. I still have to knit the other one, but since I love both the yarn and the pattern, that’s not going to be an issue at all 🙂 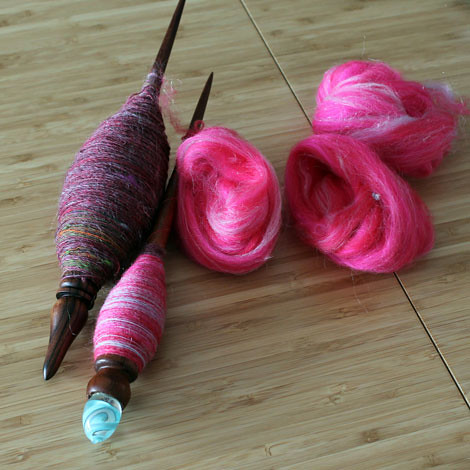 I’ve filled one spindle and I’m working on the second. I’ve ordered another IST Crafts spindle, but this time with a brass tip. I was hoping the lady who made the glindle was still in business, but alas. No more glindles for me. I’m hoping that at some point she’ll pick it up again (or somebody else will), but at least I have this pretty spindle in case she doesn’t.

The fiber is from these minibatts by Dutch Wool Diva: 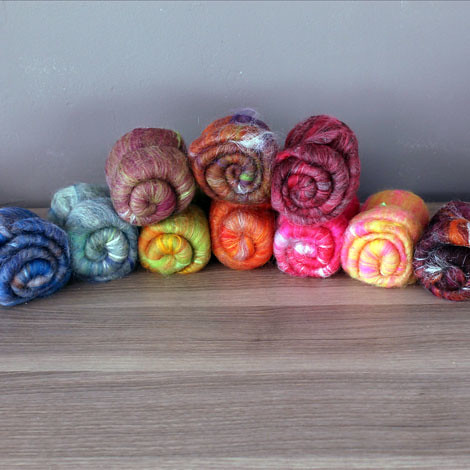 I’ve spun 6 and I’m currently working on the seventh. I thought I had 2 more but I had completely forgotten about the green minibatt I’d been spinning using my roodborstje turkish spindle. 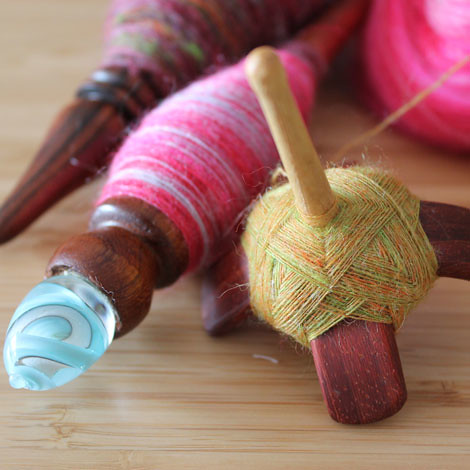 The yarn is actually turning out the same weight the singles spun on the supported spindles, so I’m very happy 🙂 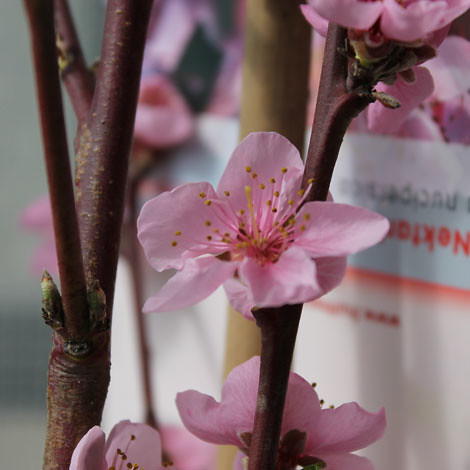 In the mean time I’ve been spending some time in my new ‘glasshouse’ and having a lot of fun with my new plants. I bought a fruit tree (which can grow to be max 3 meters tall) that produces ‘doughnut peaches’. This plant has the loveliest pink blossoms and I love sitting next to it while spinning. 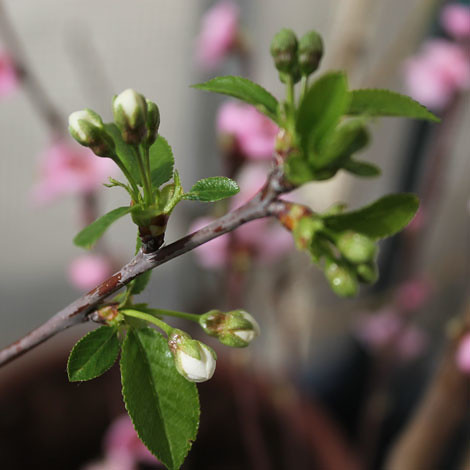 Another tree I bought is a sour cherry tree. One of my biggest nostalgic moments is eating sour cherries in Iran when I was only 2 or 3 years old. There are such vivid memories connected to this tree and fruit that I knew I had to buy it the moment I laid eyes on it in the lidl (of all places…). The sour cherry needs a warmer climate that we have in the Netherlands, so I’m hoping that it might give me some cherries if I keep it in the glasshouse during the colder moments (and at nights). So far there’s cute little blossoms so I’m already very happy! 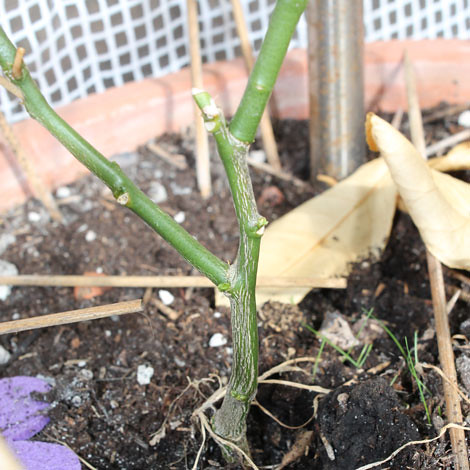 This is a picture of my mini lemon tree. It’s supposed to give very nice smelling blossoms, so I can’t wait to see what happens. I don’t think it’s visible in this picture, but there’s very tiny sprouts coming from the stems. It also grew a little brother: 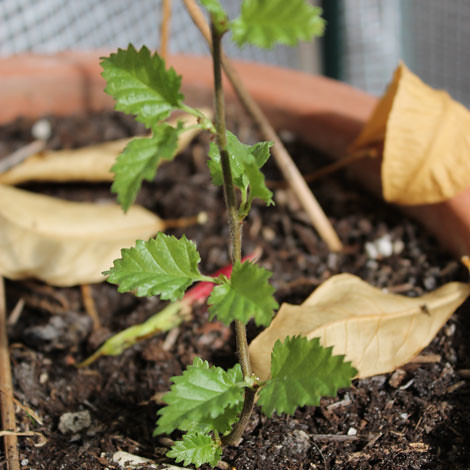 In all honesty, I have no idea what this thing is, but it looks like it could be sprouting from the roots of the lemon tree. The leaves look different for now, but I’ve seen many leaves that change shapes once they’re fully grown, so I’m not pulling it out just yet! If it turns out to be a weed I might have to pull it, but for now it can live there 🙂 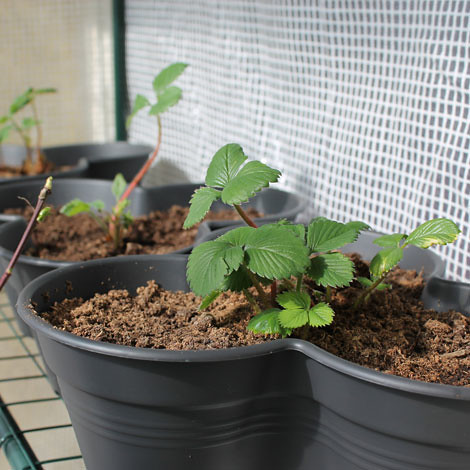 I usually buy my plants from Bakker-Hillegom. If you don’t know them, they are the official dealer for the Keukenhof. Bakker-Hillegom is a huge (and old) company with a lot of gardening stuff. When you order something, you usually get a little present as well. This time my present was 9 strawberry plants. I was in a bit of a rush and I didn’t plant them right, so I’ll have to move them again, but I decided to wait until they were a little bit bigger. I think I’ll move them around this week because they’ll need their space soon enough. It’s a hanging strawberry plant and it’s supposed to give a lot of fruits. Since I have a net around my balcony (so my cats can’t get out) there’s no way any birds or other animals can get it. So no fruit thieves here!

Hope you’re having a great day 🙂

One thought on “Pregnancy brain”