I bought a new spinning wheel! I am SO excited about it! You’ve probably seen my Bliss show up on this blog a lot and I’ve done some spinning (and loving) on that wheel. So what’s wrong with it..? Well, nothing. There is nothing wrong with the Bliss. There’s something wrong with the amount of space I have and the addition to our family.

I love my bliss because it taught me a lot about spinning. Just like the wheel I had a lot of fun spinning on it and going to my happy place. While the first wheel taught me how to spin yarn altogether, the bliss taught me how to control the process of spinning. I can make thin yarns and thick yarns (or thick and thin) and it will have been my choice, not an accident. I’ve mainly focussed on the thinner side of the spectrum, but after the TdF14 I also focussed on some thicker spinning. I usually spin like the way I use my bicycle: superspeedy. I enjoy spinning fine yarns, so I treadle a LOT, and one thing I’ve noticed is that I get pains in my ankles because the Bliss treadles a bit heavier on the fastest ratio.

No problem if you only spin for an hour a day, but when I spin, I spin for entire days, several days in a row. So I tend to get a lot of pain in my ankles and sometimes in my knees. I think this may be a physical issue with my body, because I also know that my wrists are very weak and I’m very likely to get carpal tunnel within the next 20 years. My entire family has had it (also surgery). So I’m extra careful when it comes to my weird joints and body connections.

Anyways, my lovely little bliss is up for sale, and I’ve already bought a replacement wheel to play with 🙂 I can’t have any current wips on the bliss if I’m going to look for a better home for it now can I 😉

I feel like it’s some kind of lame excuse, but I also feel like I really need to defend my bliss. Truth be told: I loved it and I still do. The design is awesome, the way you can have 5 bobbins on your lazy kate is fantastic and the whole thing is very easy and pleasant to use. In a way, I’m sad to see it go, and I’d much rather just keep it for myself, but that brings us to the whole point of why I’m forced to sell it. I don’t have any space in this house. 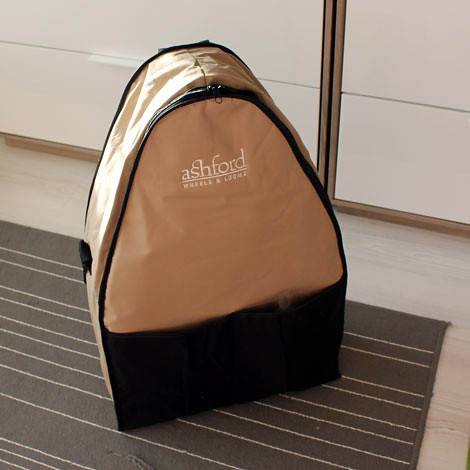 I bought an Ashford Joy 2 from these people. I ordered it on (I think) a thursday night and on saturday morning it was sitting in my home (while I was at my moms in Utrecht). I had to wait for two whole days before I could play with it! Can you imagine…

As you may (or may not) know, the Joy is a foldable wheel. Which is the most important reason for me to buy a new wheel. I have angora bunnies and cats, and soon I’ll have a baby running around in this house. A spinning wheel is an (expensive) piece of equipment and I’d rather not leave it lying around anywhere in the house. It needs to be protected against kitty claws and bunny teeth. It also needs to be protected against babies, mostly because babies can hurt themselves with it (spinning parts etc.). 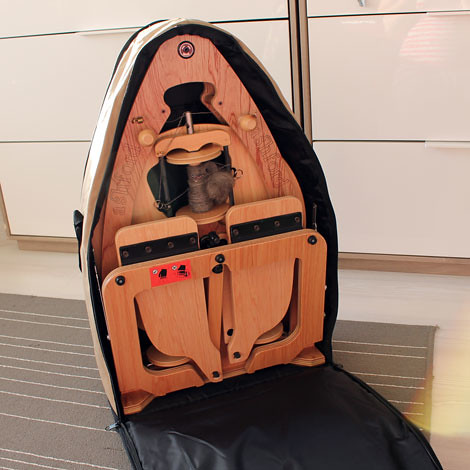 This is the closest I could come to an unboxing (because I had used it a little bit before taking pictures), but this is what it looks like all folded up. It’s really not that heavy (only about 6 kgs, which is 2 more than the bliss), but the bag and the folding makes it totally worth it. 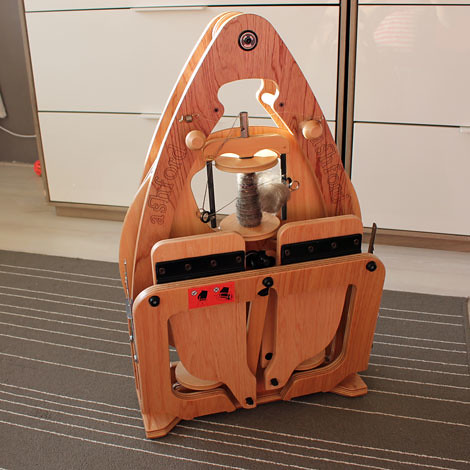 As you can see the flyer and bobbin can be unscrewed and stored vertically, and the treadles can be folded up. This way it can be lifted by the ‘handle’ (see the shape?) and it can be lifted either in or out of the bag. 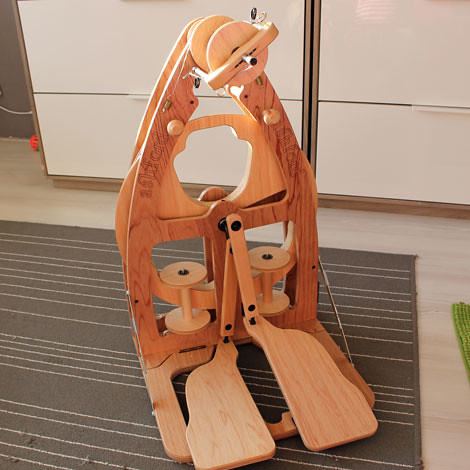 All you have to do in order to use it is to screw the flyer in place and open up the treadles. Now it looks like a ‘normal’ spinning wheel. What I love about it is that it’s so incredibly compact! I usually spin using a longdraw technique, so I don’t mind at all that it’s a tiny spinning wheel. I’m usually sitting straight and holding my hand sideways anyway, so my hand and the orifice hardly ever meet. 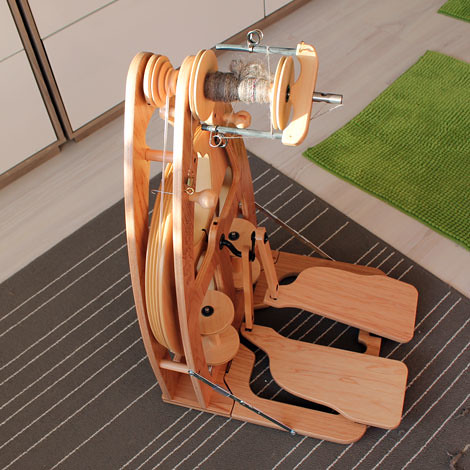 From the side it looks like this. Imagine the flyer and treadles folded up and you can see how small it actually is. I have to say that I’m really impressed with the whole double treadle business. This is my first time using a double treadle wheel and it’s much easier than I had imagined it to be. I don’t feel it in my ankles at all (maybe because I sit differently..?) 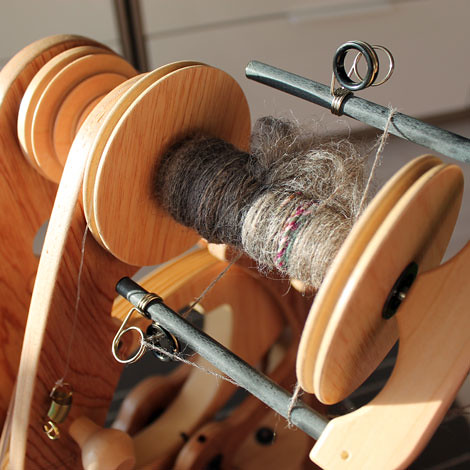 Also: the freedom flyer is really awesome! It takes some getting used to because I’ve really only worked with hooks, but it’s awesome to see that you can fill the bobbin more evenly than you can with hooks.

I hope to do some serious spinning on this wheel, and as a bonus: take it with me anywhere I go!

In the mean time I’ve been working on a secret project.. 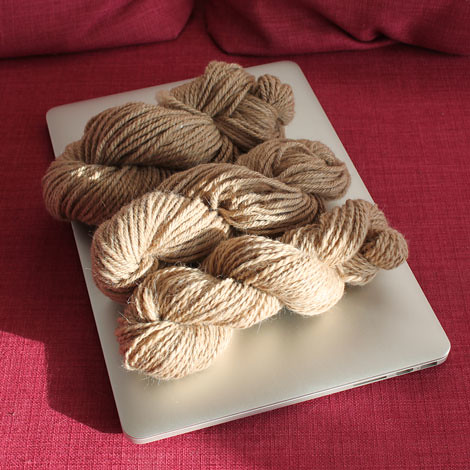