Let me just start off by saying that this isn’t going to be another one of those posts where I (rather sadly I must admit) confess to my blogging sins and try to better my life and such. By now you probably all know I’m a huge procrastinator and generally a chaotic mess. I’ve tried to organize my life once or twice, but this time I’ve actually succeeded. Shocking, I know. It took me a whole month but I’m finally actually getting there.

Let me just say that the first part of this post is rather wordy, so if you like you can just skip this part. Don’t worry, I’m Good Girl Blogger, I’ll let you know where the knitting starts 😉

I know it’s probably the hugest cliche in the book, but I noticed my outlook on life has changed quite a bit since July. You read horrific things in the news all day, but somewhere along the way you get desensitized. You read about bombings and war and such, and even though you feel that it’s all very bad, it doesn’t touch you. When something comes close enough to break through that ‘barrier of safety’ (I’m not sure if this is correct, but that’s how it feels), it suddenly becomes real. The truth is that horrible things happen everywhere, it’s just in no way connected to us as people.

I’ve been having a hard time dealing with the fact that this person just no longer exists. I was born in the middle of the second Gulf War. I’ve seen some nasty things, and yet I find it hard to accept that this guy I knew just no longer exists. I guess it’s because I assumed that ‘we’ are ‘safe’ ‘here’, and that all the horrible things happen ‘there’, or just ‘somewhere far away’. I know that rationally this isn’t true, but that’s the emotion that goes with it (for me anyway). Also: the Gulf War was a war. You expect nasty and unpleasant things to happen during a war. You don’t expect these things to happen to you when you are just going on vacation (even though they passed over a war-zone, it was never their choice to do so)

I can’t even tell you how it changed, or when it changed, but suddenly my world feels different and my priorities are all jumbled. I’m going to enjoy every day. Nothing will happen tomorrow. It will happen today. I’m going to blog more often (I know I’ve said that before, but now I’ve actually  blocked time for it in my schedule.. also: I have a schedule. I haven’t had a schedule since high school!)

I opened my etsy shop where I place my handspun yarns and hopefully some other things in the near future (I’m working on them). I’ve organized my life, my photos (about 20.000 of them) and my files. I’m working on four new pattern releases and I’m actually going to finish them (instead of saying that I’m going to do it and then never actually getting to it).

I’m planning to be the best version of me. Not the lazy girl who can’t decide what to do with her life. Not the depressed girl who likes to knit but never gets anywhere in life. Not the girl who’s a little bit on the chubby side but is to lazy to go to the gym (what else am I paying for..) to tone up a bit.

My new year begun a few days/ weeks ago and I wasn’t even aware of it.

Somewhere I have unconsciously accepted that we all die at inconvenient times/ moments, and I might as well make sure I have done everything in my power to be the best that I can be. The new beginning begins at this breath. 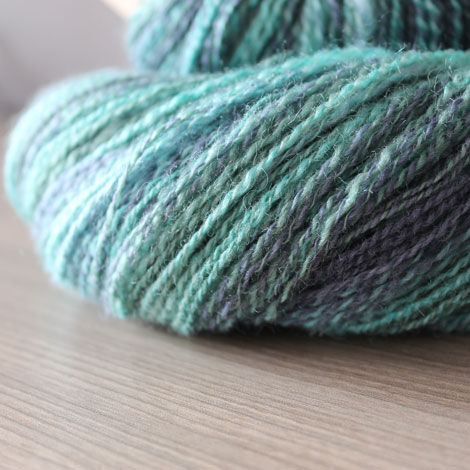 Let me start by saying that I love spinning yarn (as you may have noticed). I love the process and the fact that each fiber can be spun into almost anything. You can spin it as very thick singles, or you could make a sturdy 5-ply. It really doesn’t matter. There may be certain fibers that like to be spun in a certain way, but it’s not really impossible to achieve the result you want despite of the fibers’ characteristics. For example it’s hard, but possible to spin cotton in thick singles.

When I go out to buy yarns I’m nearly almost disappointed. I love the color, but I wish I could find this in a heavier weight, or a laceweight. But when I spin, I can choose whatever I want.

The idea behind the etsy shop was  to give non-spinners the chance to work with unique handspun. I take custom orders and I can spin something specifically for you 🙂 (I’m still working on the details and the policies so the shop isn’t exactly finished just yet, but it’s a work in progress).

The great thing about having an etsy shop is that I don’t have to feel guilty about having so much handspun and fleece lying around. I love to spin, but I don’t always get to knit with my own handspun. I find it really hard to do so in fact. When I look at fiber I usually go by what I feel it wants to become, but once it’s all spun up I have a very hard time hearing what it wants to become. Quite deaf in fact 😛 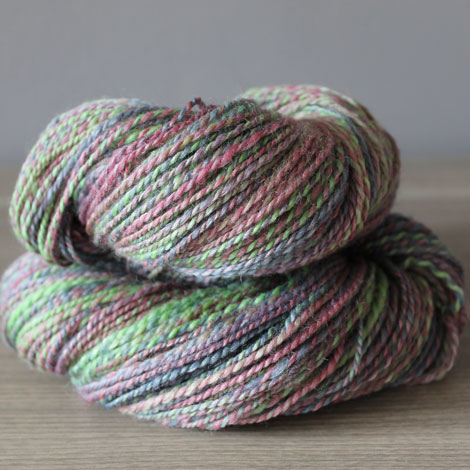 So these pictures are some of my favorite spinning projects. I love muted colors, so if nobody wants this one I might end up getting high off my own supply…. 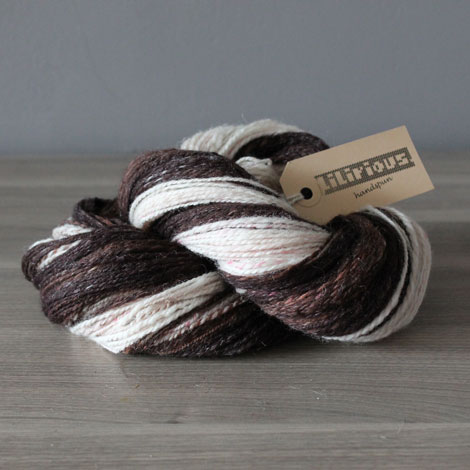 Remember this one? it’s the fiber from the previous post all spun up. This was one of the nicest fibers I’ve spun with in a long while. You might not be able to see it in this picture, but I managed to preserve the colors and it turned into a very nice gradient! 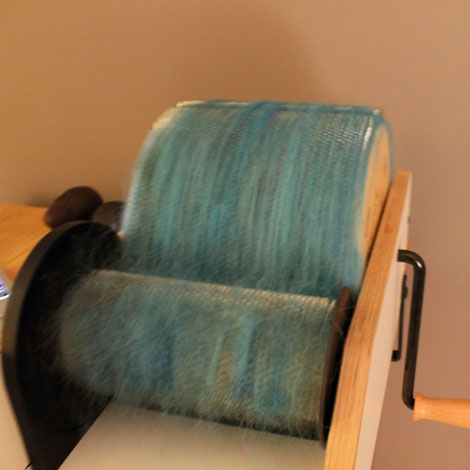 At the moment I’m working on a custom order for a cardigan. 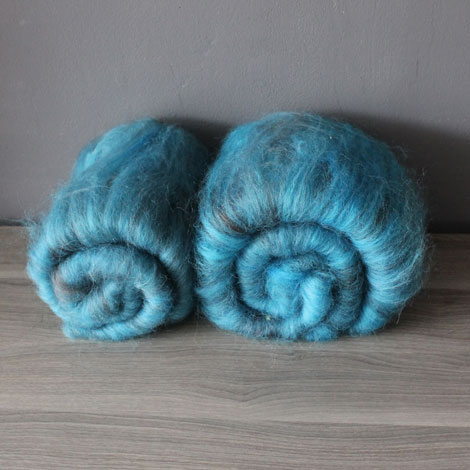 I love to work with blends that aren’t really conventional. This, for example, is a blend of 70% alpaca and 30% Wensleydale. The alpaca tends to grow and lose its shape, while the Wensleydale ‘keeps things together’ and adds strength and durability. It’s going to be knit (by the customer) into a mens’ cardigan, so I’m not too worried about scratchiness. (but really it’s not scratchy at all..) 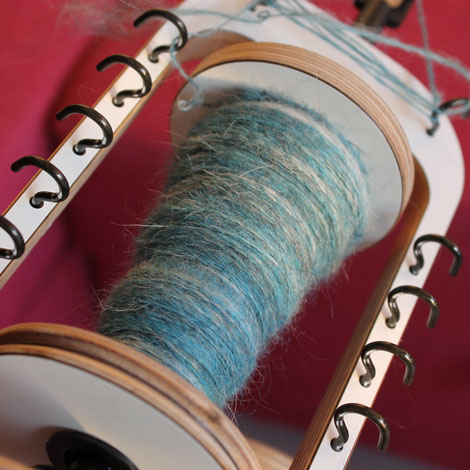 I really love spinning this stuff. It’s just so fluffy it gets everywhere 😛 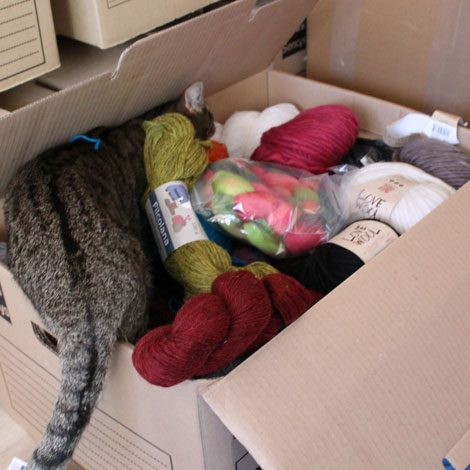 Noodles likes to help me organize. She loooves to check out our stash. You can’t see it in this picture, but she’s really digging as if her life depended on it. She threw half of the yarns out and tried to bury herself in yarn. 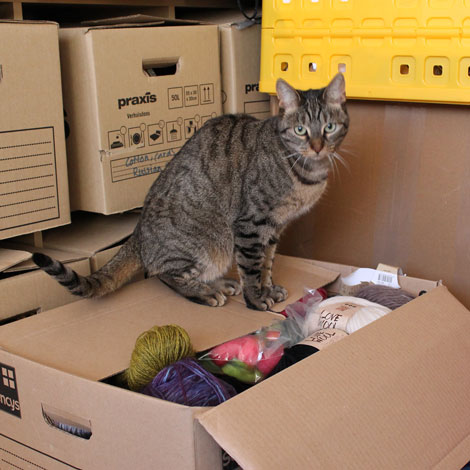 This is the face she gives me when she realizes I’ve been looking at her the whole time and have taken at least 10 pictures to prove her guilt. She’s all like “wut”. 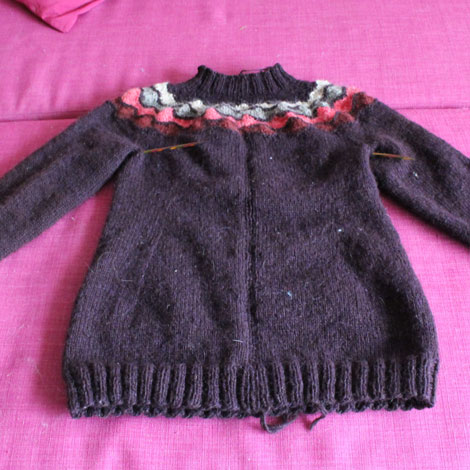 Good thing about getting my life organized: I’m really finishing stuff now. Now that this is done I’m going to work on the patterns. No knitting until I have finished them and sent them out for testing. I still have to graft the armpits together here though (also: steeking and other types of finishing). 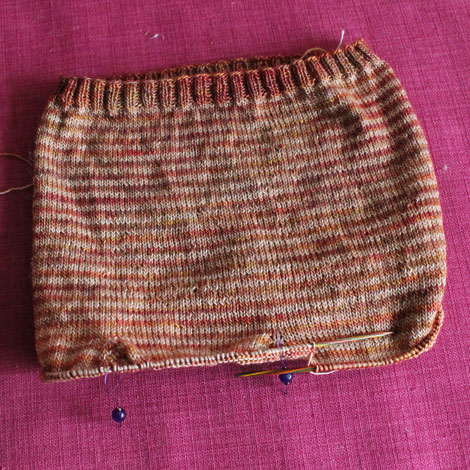 Meanwhile I’m also working on some cowl-ish thing. I was at Penelope Crafts the other week and they had just received the new order of Madelinetosh.. I’m such a total sucker for madelinetosh so I caved and bought 2 skeins for myself, and 5 for another project that will have to wait until I’ve finished the pattern writing. 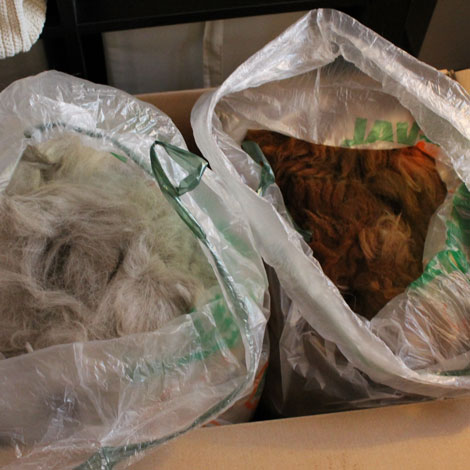 Last night there was an item on tv about the abuse those poor merino sheep have to go through. Mulesing and whatnot. As a kitty and bunny mom it bothers me to no end that these animals have to deal with things like this so that we (the customer) can buy things ‘for cheap’. I’d much rather buy dirty fleece from a local (or any for that matter) alpaca/ sheep farm where I know that the animals are treated correctly and if possible, are even loved 🙂 I think the fiber is a secondary thing. The health and wellbeing of the animals (the living!) should always be more important than the fleece. So in my attempt to support local farmers and ranches I bought 2 kilos of alpaca fleece. Yes I need to clean it, but it’s was very carefully packaged and the lock formation is still intact. 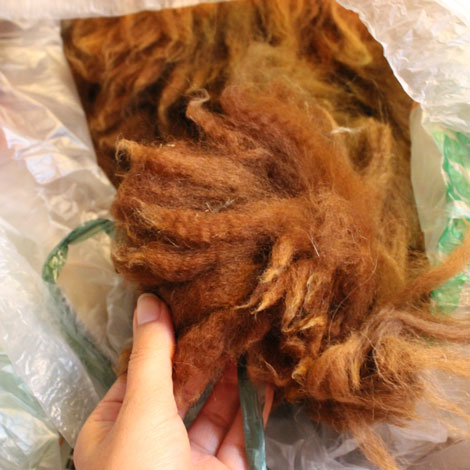