I’m not going to say that I have the stupid, but it sure feels that way! I can’t seem to hold a single thought in my head for a few seconds, and I keep forgetting words and things. I know that this is all normal and it will pass, so I’m trying to enjoy myself and just go with it. The past few weeks we’ve been organizing our lives and we’ve been throwing out a LOT of stuff. Isn’t it amazing how much stuff you can accumulate in a few years? There’s so much stuff to throw out/ give to charity! Thankfully, most of the work is now behind us and we can focus on the fun stuff! Buying cute baby things. Did I mention I haven’t bought a single thing yet? I’m very blessed to have a large family, and we’ve been lucky to receive a lot of baby things already. So we don’t have to buy a lot, but there’s things you really need to buy yourself. Like that ubercute little onesie, or those cute booties. (or you can just knit/ crochet them yourself.. which I also haven’t even done yet).

So here’s the thing. I cancelled everything in my schedule to immerse myself into baby mode. Because I’ve been so busy I haven’t even begun dipping my big toe in it.. The past few weeks have been hectic so I decided that it would be best if I just kept to spinning. I took my spindles with me wherever I went, and spent a lot of time just relaxing and spinning on my supported spindles.

When I realized that spinning worked (and knitting did not), I decided to order some extra fiber just to be sure. Because, honestly, you can never have enough fiber to spin! 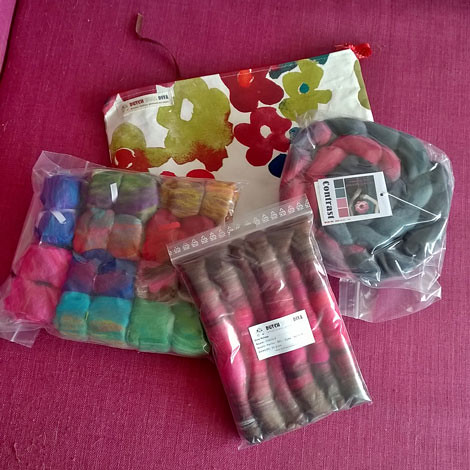 So this was my last order with Dutch Wool Diva. I’ve been spinning her mini batts for a while and I really like the quick changes in color. You’re not spinning 100 grams of the same fiber/ colorway, instead there’s a bit of each color and you keep alternating. It’s also very pretty on your spindle because of the different colors. I noticed that I get bored very easily at the moment, and these mini batts really work! 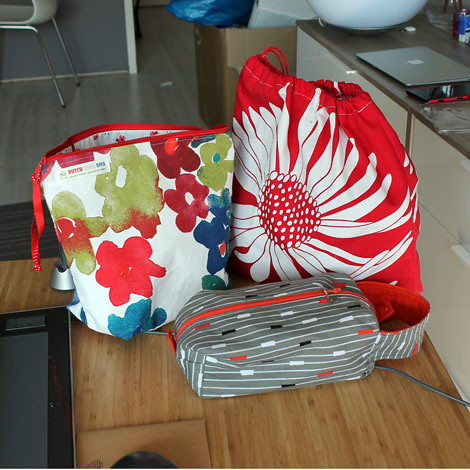 It’s really funny because the knitting wip bag I ordered was supposed to be my second (and my BIG) wip bag, but a few days after receiving it I was gifted the floral wip bag on the right, by my friends 🙂 I am now the proud owner of 3 awesome wip bags and I’m very happy with all of them 🙂 It’s one of those things that I never thought I’d miss before I had them, but now that I have them I can’t imagine living without them.. I should really sew me some more! 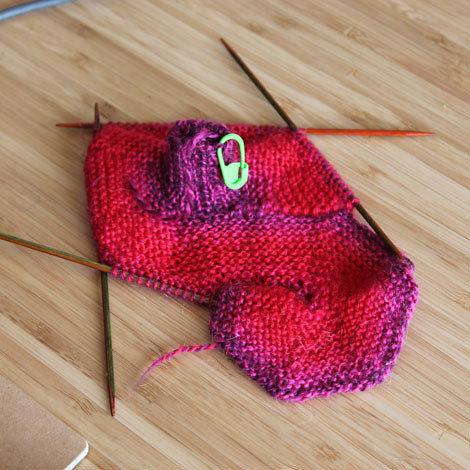 Before I start talking about the spinning I’d like to mention something first. Last time I already said something about not completely getting the pattern and wanting to try again. It’s been a few weeks and I’ve managed to talk to some of my friends who have also attempted to knit this pattern. Unfortunately, it’s not just me not getting the pattern. I’ve been reworking the pattern because it was driving me insane (because you end up with extra stitches or too few to finish a repeat). Now that I’ve re-adjusted all the increases and decreases I understand why the pattern is written the way it is. I just wish there would’ve been a little explanation. Anyway. I’m currently blaming it on my pregnancy brain and I’m going to just follow the pattern blindly until the end. It will either work (or not), but I’m not going to care. I’m going to stop thinking about it. In all honesty: I just want to have these mittens so I can gift them to my cousin. It was supposed to be her birthday present (november 2014….). 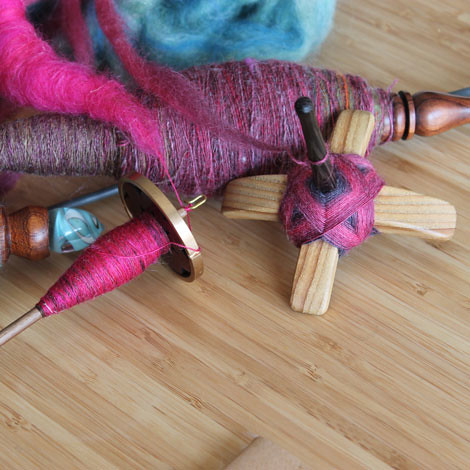 You know, I had actually forgotten how awesome spindles are! A while ago I had bought the book (digital) “Respect the spindle” via Interweave. I had already read it, but I re-read the book because I had re-discovered it while organizing my computer stuff. It amazes me how much spinning you can do while ‘on-the-go’. The past few weeks were rather busy and I didn’t have the time (or the space and/ or the patience) to bring out the wheel. I have been spinning on my spindles though and I’ve been enjoying every moment. I now have three different spindles and different spinning projects to choose from. When my new IST Crafts Russian style spindle arrives I’ll have one more spindle to play with. I used to think that spinning a lot of fine yarn was best on a wheel, now I know that this is not necessarily true. Like with all things, it’s the amount of time that is the key ingredient. The better you get, the faster you can spin. I don’t want to say that my spindle spinning is faster than my wheel spinning per se, but there has been a lot more spindle spinning than wheel spinning, so guess which one ended up with more meters of single 🙂 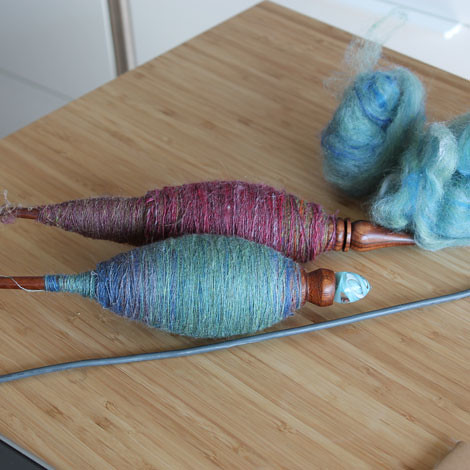 Another thing I noticed is the following. It’s really important to have the right tools and equipment. Though I really love my first IST Crafts spindle, it’s not the fastest spindle I own. It spins nicely, but there’s just a little too much friction, so you end up straining your hand/ fingers more and more to get the same amount of twist. The one with the glass tip has a lot less friction, so you can spin for much longer periods of time. 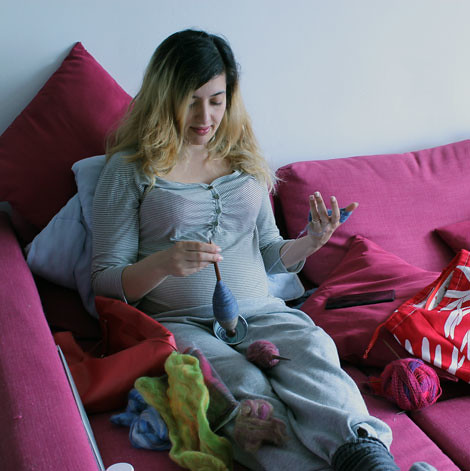 Because.. well I don’t know.. here’s a picture of me spinning. Actually I’m not spinning here, I’m wrapping the freshly spun singles on my hand in a figure 8, so I can wind it back on the spindle. Let’s all ignore the hair though.. 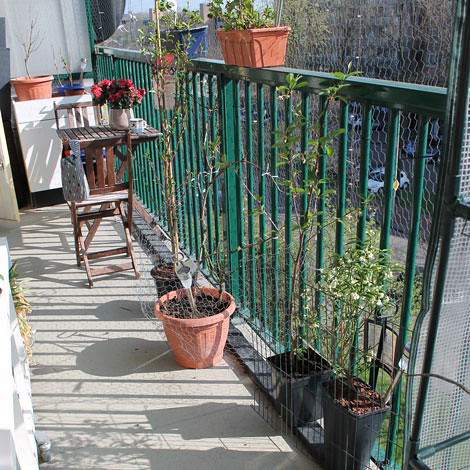 In the mean time I’ve been ‘gardening’. Now that the weather is cooperating I can put my plants outside of the greenhouse (I’m standing in it, can you see?), so they can get used to the weather a bit. In the evenings I put them back inside and close the zippers on the door. Our apartment may be a bit (ahem) ‘cozy’, the balcony makes up for everything. There’s sun between 12.00 and 20.00, and there’s hardly any wind (in spring/ summer). So even though it’s colder out in the open, it’s always sunny and warm on our balcony. This means that everything grows nicely 🙂

You can actually see the difference between inside the greenhouse and outside by looking at the grape vines. The one that remains outside is only just sprouting tiny little buds and leaves. This is a grape that is used to the colder climates (himrod), the other one however (pictured below) is a syrah, a grapevine that is used to much warmer and dryer climates than we have in NL. 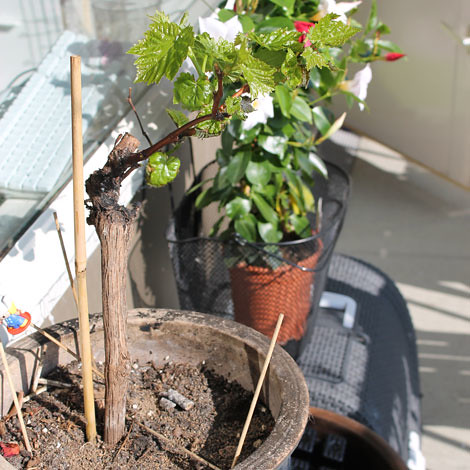 I bought this one last year (may 1st 2014) and I’m very happy to say that it’s already so much farther along than the other grapevine. I only bring it out on sunny (warmer) days, and keep in in the greenhouse during the colder days. I measure the warmth in there, so if it gets really hot I’ll be sure to open up a ‘window’ to keep the temperature somewhat regulated. Last year, I had a bit of a bug infestation, so this year I’m really paying close attention to the plants. I still don’t want to buy any chemical and agressive, so I’m going to experiment with some anti-bug recipes I found on the internet. 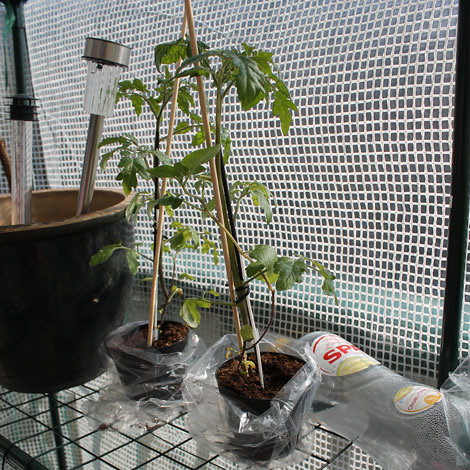 In other news: the website where I buy most of my plants from (Bakker-Hillegom) had something new: the TomTato, which is exactly what it sounds like. A tomato plant and a potato  plant combined into one single plant. So here’s the thing, you’re supposed to plant it in a 40L pot and you’ll have a whole season of cute and pretty cherry tomatoes. In the early fall you cut off the top part and a few weeks later you dig out your potatoes. No garden needed! So this was exactly what I needed because I absolutely love tomatoes (and cherry tomatoes are even better), but I also love potatoes. It’s so bad I can eat potato all day, every day. I’m weird like that, I know. 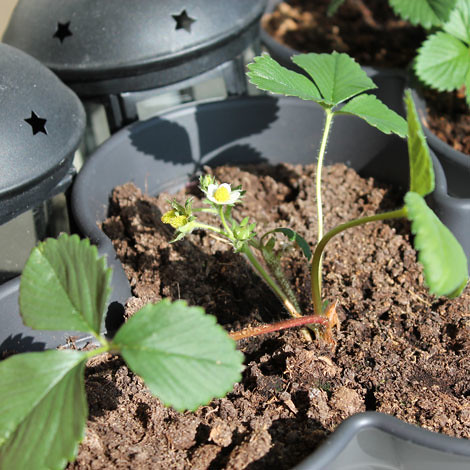 I’ve given strawberries another shot. Now that I have a greenhouse, I don’t have to worry about them blowing away in the wind, or freezing off. These straberries are more fragile than the ones you can buy in the stores it seems (because they are shipped at a much earlier stage). But I really love planting my own stuff and buying them fully grown seems like cheating to me 🙁 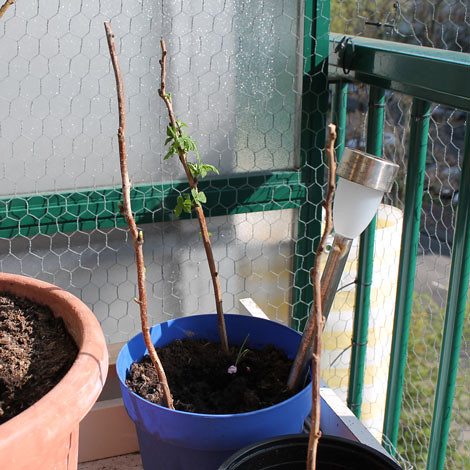 Because I rally like fruit plants/ trees I bought these raspberry plants. Two of them are yellow raspberries and the other two are red (one is not pictured). They’re not going to give any fruit just yet (and that’s okay because the environment isn’t really nice anyway), but I like to grow them already. You never know what the future holds, there might be a garden in there for me yet 🙂 A girl can dream right 😉 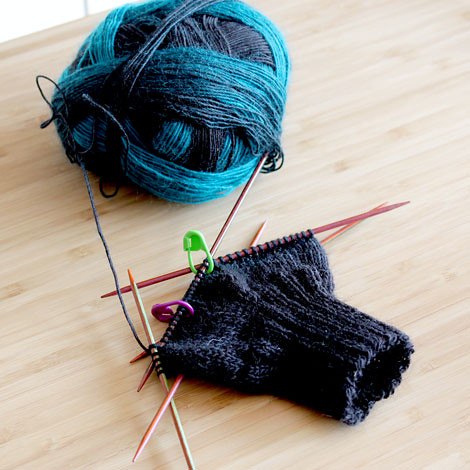 These past few weeks have been about finishing up and organizing my life (how many times are you going to hear that….. :P). I’ve felt lost and confused in my own home and I haven’t been able to keep a thought in my brain for more than 10 seconds. But I’m getting better again and with that comes knitting. These are the modded knotty gloves I’m knitting for the BF. By now I’ve already finished one and I’m working on the second one. I’ll be sure to post them next time.

One of the things I’ve been organizing was my tax folder and my VAT stuff. April is always fun like that. I now have a system so I don’t have to do it all at once, I can actually keep everything neatly in place and just enter the numbers whenever I need to do my taxes. Which is a huge improvement 🙂 Hope you’re not tired of me talking about reorganizing stuff for the thousanth time This too shall pass 😉