Goodbye February! You were short and sweet, and even though I didn’t manage all of my goals (I missed the last week’s 2 posts), I did manage a lot of other things! Now let’s take a look at the goals I set at the beginning of February.

I did manage to finish 3 wips, and got a good start on some other projects. Halfway through I tried to get two stranded knitting projects finished as well, but it didn’t really work out. I did manage to knit some, so I guess it’s not all too bad.

I blogged 6 times instead of 8 times because I missed the last week. How so you ask? Well by baby is teething and he’s been waking between 5 and 6 am every morning. He usually (sort of) sleeps until 7 am so it may not sound like it’s a lot earlier, but believe me.. it is. He still gets two feedings a night and since he’s teething he’s been very restless at night. So even when I go to bed at 9.30 PM I’m still a bit sleep deprived when he wakes in the morning. Also.. midnight poops.. maaann.. he’ll be totally awake at 2AM because he’s pooped and wants to be changed, then I’ll change him and he’ll go down at 3.30-4 am, and then he still wakes between 5 and 6. I gave myself a week off because: a: there was hardly any knitting, b: I was too braindead to actually accomplish something, c: the house was a total mess, and d: a cranky, teething baby wants to be held and hugged all day (while drooling all over himself and you in the process, so there’s twice as much laundry.. yay).

The last three goals were successful (somewhat). The closet is done, but I found some other clothes that were still boxed up so I’m sorting those at the moment. Timing my work is going really well, not counting last week, I’ve been able to work between 30 and 35 hours a week, which is really nice. Losing 1kg is an interesting one, when I don’t sleep, I snack like crazy so I’m not sure if I actually lost anything, I know I didn’t gain any weight.. so I guess that’s worth something too haha 😛

So now the goals for March:

These projects need to get finished because spring is coming and I’m not going to be knitting those winter projects in spring, so there you have it. The socks are not winter projects per se, but since I’m not joining Sock Madness 10, I’m going to knit these for fun 🙂

About the patterns: I have a number of designs ready, I’m working on the writing part and then they can go for tech editing. The problem at the moment is that I’m too busy doing other things to get the writing and calculating part done, but on the other hand, I can’t make new designs until I’ve finished writing these up, and right now I’m making sketches of all my new ideas and these patterns are blocking everything.. so first we write them out, then they go for tech editing and then they go for testing. I made the mistake of publishing a pattern that was not tested and I’m never going to do that again (though in my defense it was my first pattern and I really thought nobody would ever buy it, so spending money on it before publishing it seemed a bit pointless.. lesson learned the hard way).

So, now I’ll move on to the knitting part, yay! As I mentioned Ma’iq is having a hard time so I’ve been in need of some simple patterns. 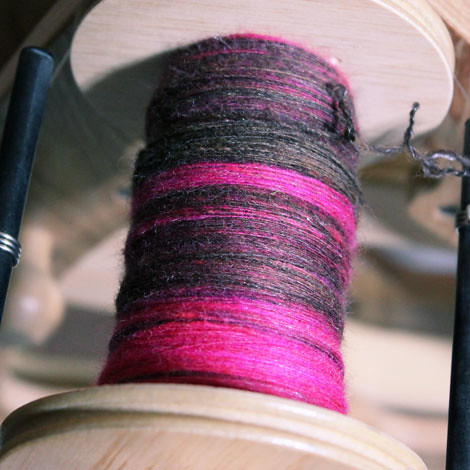 One of the things I worked on was spinning these rolags on the wheel. I started out on a spindle during my pregnancy, but I wasn’t able to finish because of the baby and the move. I found the rolags all bundled up and I feared the worst. 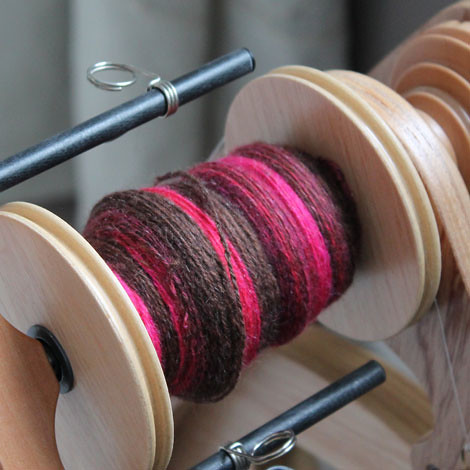 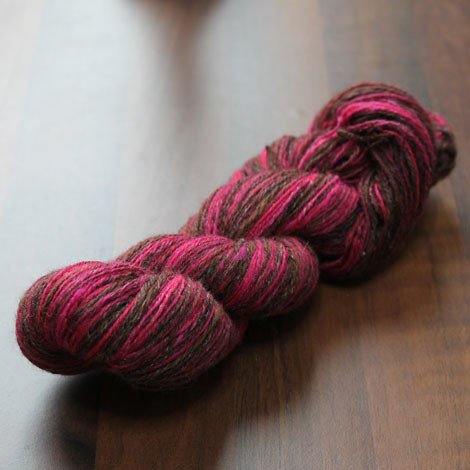 I absolutely loved the rolags, and I really like the way the yarn turned out <3 It’s not washed and measured yet, so I have no idea what I have. I just know it’s 50 grams of delicious dark chocolate <3 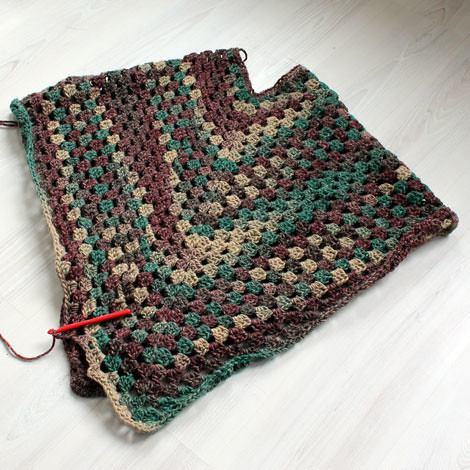 In the mean time I’m almost done with Gaucho. I’m loving it and I just need to finish the collar and the fringes and I’m good to go. It’s a great pattern and I love the yarn. I can’t wait to wear this thing. 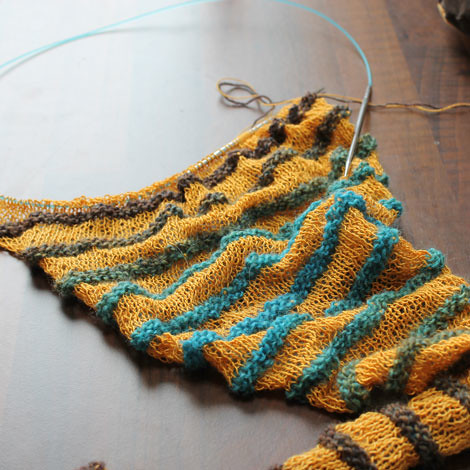 I’ve been procrastiknitting a lot because I couldn’t spend any time with the knits that needed to get finished. I don’t know why it works that way, I just know that it works that way. I plan on finishing two tiny projects and all of the sudden, a lot of progress can be seen in a lot of other projects… I guess that alone is worth having goals, even if you don’t achieve the goals you set, you’re achieving goals your knitting has set for you. 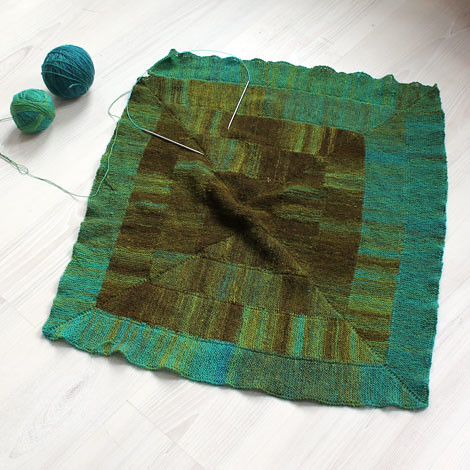 This is one of the projects I worked on. At first it seemed like it would never end, but now that I’m using this as my procrastiknitting project, it’s growing a lot faster. You can see how much smaller the second ball has become while working on this. I really like how these colors are working out. 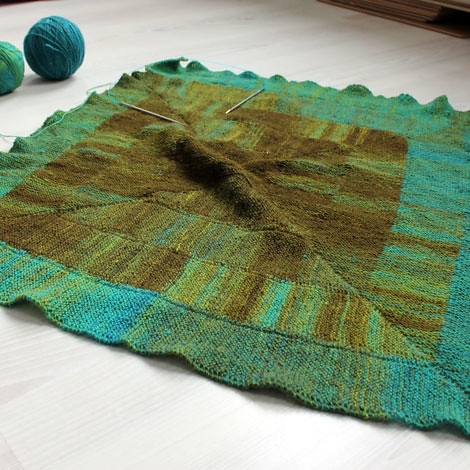 Maybe it’s because I wound the yarn into balls instead of a cake, but I can’t imagine the other colors anymore, Every row (around the blanket, not every 20 stitches). I know there’s going to be dark blue in the end, and I’m really looking forward to this blanket being finished. 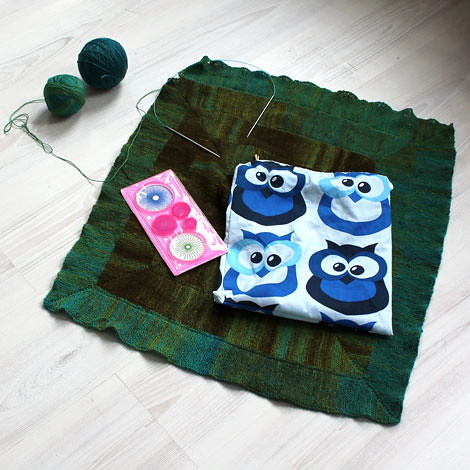 In all honesty, at first, I didn’t enjoy working on this blanket. I loved the yarn and the way the yarn was changing colors. I also appreciate how much better I’ve gotten at spinning compared to the first baby blanket I made. Though, to be fair, I was going for an uneven look because of the nepps. 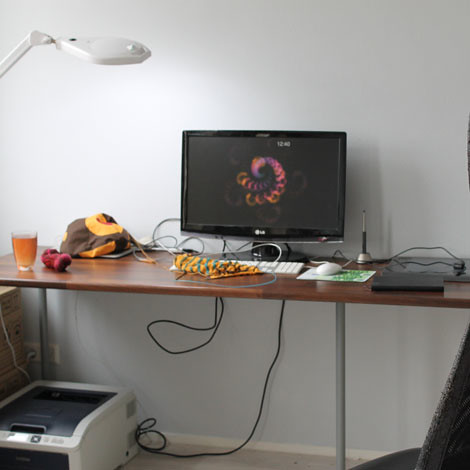 On tuesday I had a “day off”, which basically means DH took DS to see MIL and FIL, so I had a day without a baby. Let me start by saying that this was the first day in 8 months time that I had been alone for more than 3 hours. It was glorious, but I also had moments when I didn’t know what I was supposed to be doing. One of the things I did was borrow Ma’iqs room because he’s not really using it yet, and I need a place to work. I separated the creative space from the “this-is-where-I-do-my-taxes” space and now I feel a lot better. 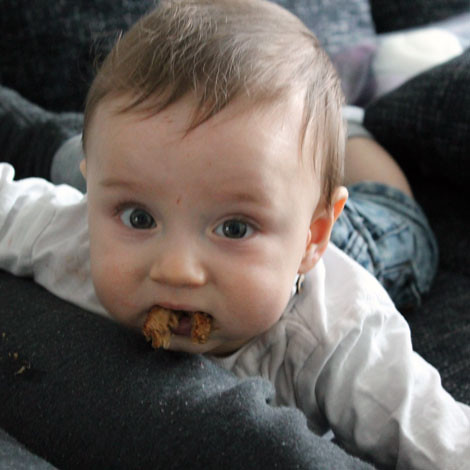 Hello, everybody! This is how I vampire! <3 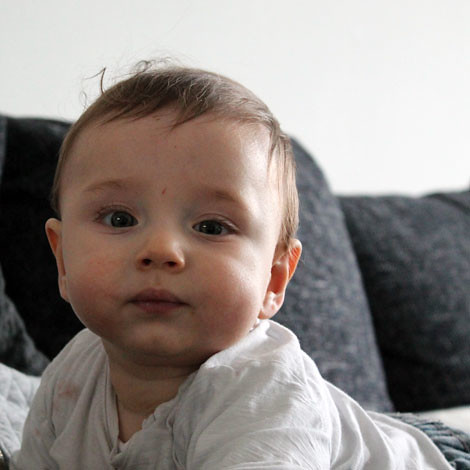