It’s time for a short, in-between sort of post today! Today I gave my bunnies an early haircut. I usually cut them every 2 months, but due to the summer heat I decided to cut them a bit sooner. They were panting all the time and I felt really bad for them.

I know I’ve probably mentioned this before, and I might have posted pictures before as well, but I feel like nothing I say can convey the actual mess that comes with grooming/ ‘harvesting’ angora hair. 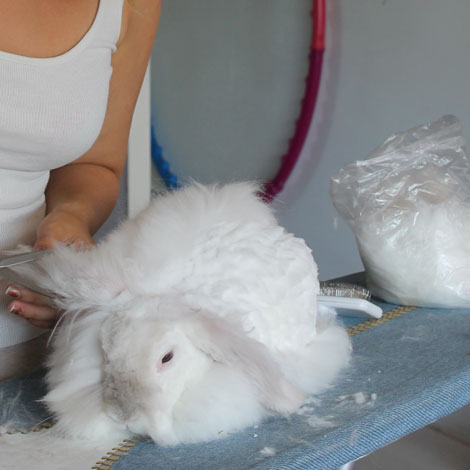 Here’s Bam getting a haircut. First of all, angora hair will get all over everything. It will be everywhere. This is a picture of me just starting out, I don’t have a picture of when I was done, because I was covered in bunny hair head to toes. It was everywhere, but most importantly: it was in my eyes. I’ve gotten so much better at grooming and cutting them, but for some reason you get covered in a thin layer of it and it feels like being covered in a spiders web. Nice.. 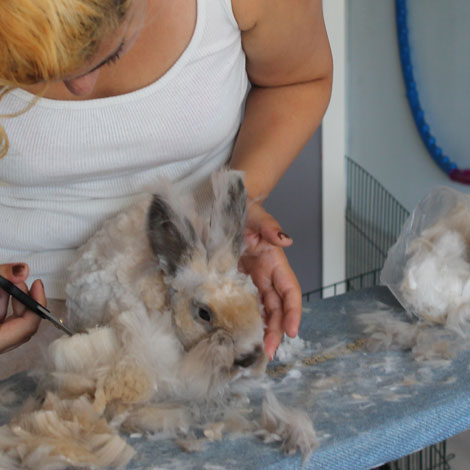 Well now that the complaining is done, I should also mention that I’m actually getting good at this. It takes me MUCH less time to cut a bunny and they look so much better than the first few times I cut them. It also helps that they’re slowly getting used to being picked up and groomed. When we first got them it was terrible, they would kick and try to escape constantly. Obviously they don’t like to be picked up, so I decided to give them treats immediately after picking them up. I also groom them on my lap, but cut their hair on an ironing board. I can manage grooming them on my lap, but they’ll try to escape if I try to give them a haircut. Also: it wil get all over the house.. I can manage a covered ironing board.

Unfortunately it’s too dark to take any good pictures of the bunnies right now. They spent the entire day running and hopping around. So adorable. 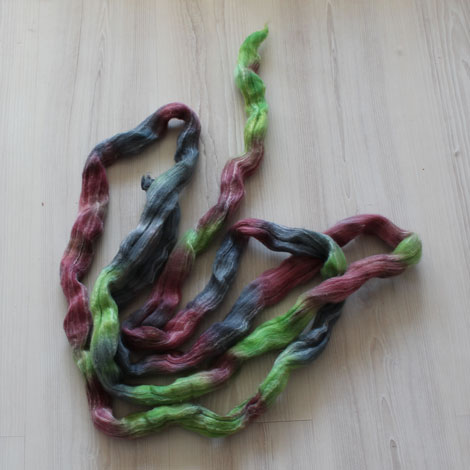 I’ve been spinning a lot lately! This time it’s Fireshadow by Dutch Wool Diva. I’m going to spin another fractal yarn, because it’s my new addiction and I think this fiber and these colors will work. I’ve also been thinking and writing and rewriting something I’d like to say about the shetland/ clun forest fiber I wrote about in my last post. I’m really not a snob and I know that the fiber was very cheap so I shouldn’t complain. When it comes to my own work I can be incredibly picky and I can be very hard on myself. That doesn’t mean that I don’t make any mistakes, because I make tons, but when I make something for another (especially if it’s something I’m going to sell) I’ll try my hardest to make something that’s really worth it. I’d want the customer to enjoy my product, and to come back for more. This product made me want to throw it in the trash and not think about it anymore. Why? (and seriously, I’ve washed fleece before and I’ve spun with my poorly washed fleece as well. There’s a learning curve lol).

When you spin you don’t want your house, your clothes and your spinning wheel to get covered in dirt, sand, vegetable matter and a coat of dust. This stuff was filled with it. I remember spinning with some handwashed alpaca that I hadn’t washed well enough. This felt exactly like that. I hated spinning it because my spinning wheel got dirty and even 10 minutes of spinning left me with dirty hands. If you’re going to sell something that’s (hand) processed, at least make sure it’s clean.

Another problem I encountered was that the shetland/ clun forest blend was not a blend at all. It was quite random. Some colors were shetland (on the rough side) and some parts were clun forest (much softer than the shetland). The clun forest was also very greasy. You can blend fiber if you like, there’s a whole list of nearly endless possibilities of blending fiber, but you can’t make a nice yarn with sections of different fibers. You simply can’t. Some parts of your yarn will have a completely different texture and feel. You can of course if that’s what you’re intending and you’re well aware of this, but you should notify the buyer of this (imho questionable) quality. I spun it anyway and decided to see it as practice, but I’m not sure if the yarn will become usable or not.

Last but not least. The batts were filled with nepps and  overall huge knots of unusable fiber.

Again, I realize the fiber was really really really cheap so I guess I got what I paid for, but I still feel like they could’ve asked more money and taken a bit more care to make a better product. The fiber comes from local sheep and I would’ve loved to support such a business. I’ll stop the ranting here and leave you with a weird sleeping kitty picture 🙂 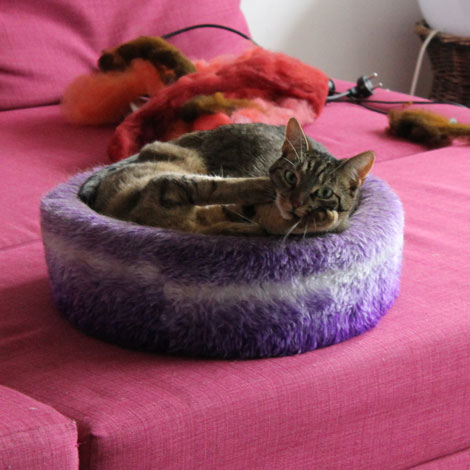