Though it’s already February, and I’ve completely missed my blogiversary, I stil feel I should finish the post I started in December 2016. I started this blog 8 years ago on January 19th on blogger. It was a bit awkward and I was searching for something, anything. What I found was self acceptance, and more creative energy than I could ever dream of. I found a way to channel my inner creative being and just be. I started this blog because I felt like there was this creative monster residing in me that just wanted to be unleashed. I did everything I could find. Besides the studies in architecture and urbanism I was looking for something I could find myself in. So I tried a lot of things, airbrush, art, journaling, singing, writing, crochet, felting, sewing, knitting.

I guess knitting stuck. This blog changed who I am, made me a better version of me, a more focussed me. A me with better memories. Every time I look at this blog I remember the awesome (and not so awesome) things that have happened. It’s a reflection of my daily life, and without it, as it turns out, I actually feel rather lost.

It’s with this history in mind that, as the year was coming to an end, I heard and read a lot of people saying that 2016 was a shitty year. And, though a lot of terrible things have happened, on a personal level this was one of the better years.

Obviously 2015 was my greatest year yet, but 2016 was the year my little man turned 1 years old, when he learned to walk (run mostly… running is definitely his thing), and it’s the year where I feel that my 30s are beginning to kick in.

Obviously the new job title as yarn shop owner is helping tremendously. All of the sudden you go from couch potato to running and working 7 days a week. Looking back I see how, at the beginning of the year, I was looking desperately for structure and balance in my life. I’ve never really been one to sit at home and look at the walls all day. I need to do shit and get out of the house. But back then I didn’t have much to do and I structured my life around the naps and the time I had to blog. The time I spent ‘working’ on things was desperately measured out, and every disruptance or disturbance would actually stress me out so much a whole day would be ruined.

I’ve written about the ugly monster of depression a lot, so I’m sorry if this is repetitive and/ or boring, but he’s always hiding in the shadows. Waiting for that unguarded moment. Even though I thought I was ‘on top of things’, and happy, I was in fact lost and sinking deeper without even realizing it. I wasn’t knitting, I wasn’t blogging, I wasn’t doing the things that make me happy. I had unknowingly reduced my life to trying to control and micromanage the most insignificant little details of my life. Simply because I wasn’t in control of anything in life.

And then the yarn shop happened, or at least, the idea of the shop happened. On the 4th of april, which is also why I haven’t blogged between march and the end of June.

I saw everybody post “best nine” photos on instagram and I realized I haven’t posted anything since September and I felt really bad haha.

I’m not sure if I can actually reduce all of 2016 to the best nine, so here’s an attempt at a recap. 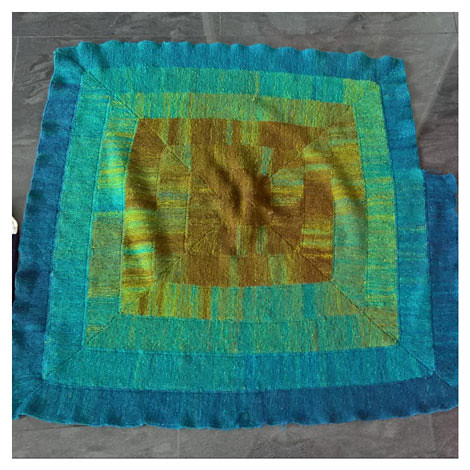 So here’s a list of FO’s and accomplishments of 2016. I actually forgot some of them, and some of them have already been blogged about. But since this is a 2016 recap I’m going to post them anyway.

I finished Ma’iqs blanket and he’s been sleeping on it every nap and night since it was finished. 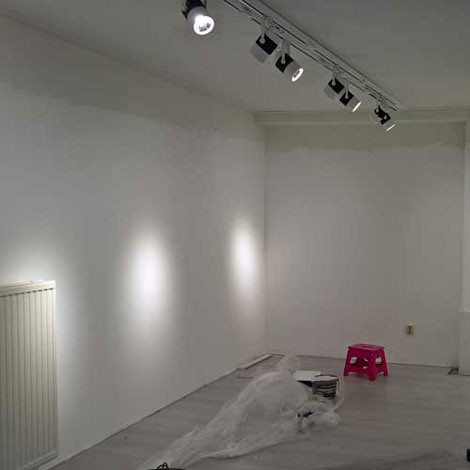 I can’t believe this, but the shop is such a huge part of me and my life, but it feels like it’s always been there. It’s almost like having a baby, at first the baby isn’t there and you can’t imagine life with a baby, then you can’t remember what it was like without the baby. I can’t imagine life without the shop either, and seeing this picture feels like seeing a very old picture in a very old album. 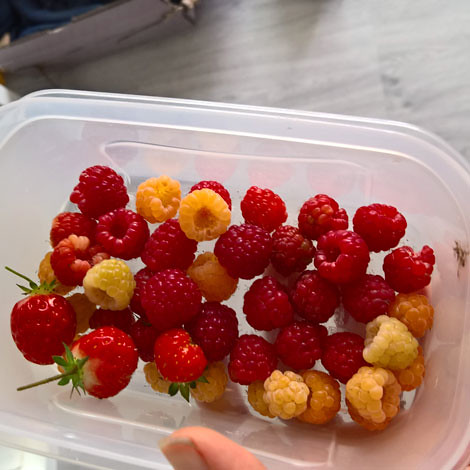 My garden. I absolutely love my garden. I’ve never had a garden before and this garden was neglected like it was nobody’s business. Starting up a garden while moving to a new house, while looking for a new lifestyle and overall putting way too much pressure on myself might not have been the best way to go in hindsight. Now, a year later, I have even bigger plans, but this time I’m prepared and ready. Even though it was a bit hard at first, it absolutely worked, as the image above shows. This was a random day of plucking 🙂 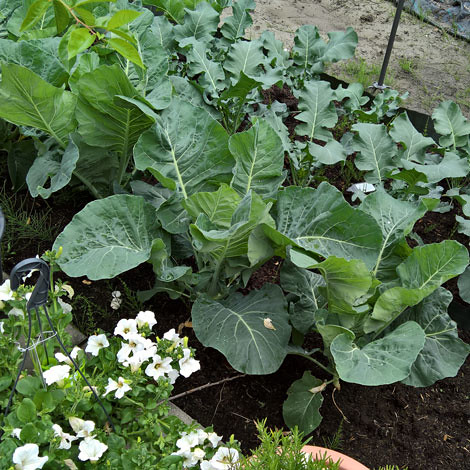 I had never planted broccoli and cauliflower, but it was a huge succes and they were delicious. You can see (on the top right) what the soil looks like in this area. It’s not fertile and it’s pretty much dead. When they build these new neighborhoods they cover huge areas with sand because it’s better and more stable for building, but it does mean that the soil is basically dead. It takes a few years for any life to find these gardens again, and it makes for a lot of trouble if you expect things to “just grow” in the dead sand.

So in order to be able to build a bit of quality earth I bought planting soil from the gardening store and mixed it with a bit of the sand. On top of that we’re building new soil by way of compost. We try to keep everything to rebuild the soil. We also use the bunny droppings on the compost heap. 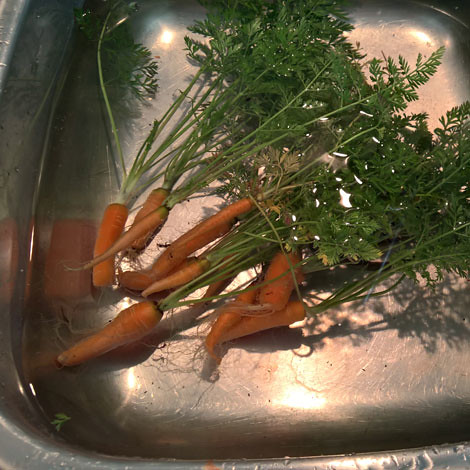 Before I start planting this year I’m getting help building raised beds. The soil is not only very hard, it’s also covered in pebbles. I’m not sure if you remember what my garden looked like, but it was covered in plastic and layered with rocks. A very low maintenance yard, but there was less life than you’d find in the desert. When removing the pebbles and the plastic I tried to loosen the soil as much as possible, but there were a lot of ‘sunken’ rocks that I couldn’t get out of the way. As you can see my carrots had some issues with these rocks. This is the way they came out of the dirt, I haven’t cut them.

So the plan is to have raised beds on the sides of the garden and have rubber mats in the middle so Ma’iq can still play outside, without stumbling over all the veggies and fruits. This way I can allot more space for the angora bunnies and I don’t have to break my back checking on the garden. win/win/win 🙂 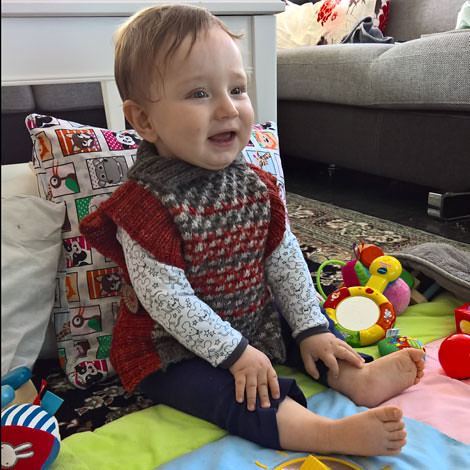 In knitting news I had completely forgotten about this project. I was looking for a “poncho”  for boys and I designed this for Ma’iq. It’s something between a a poncho and a body warmer, but he has a lot of freedom to move around. What I did notice is that the neck opening should be a bit roomier. I not only completely forgot about this project, it was going to be a pattern, so I’m going to have to write it down again. 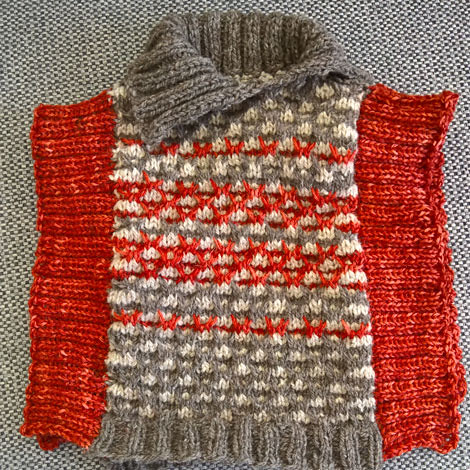 I’m still happy with the way it turned out, and if I managed to design a better neck opening it’s going to be ready for testing 🙂 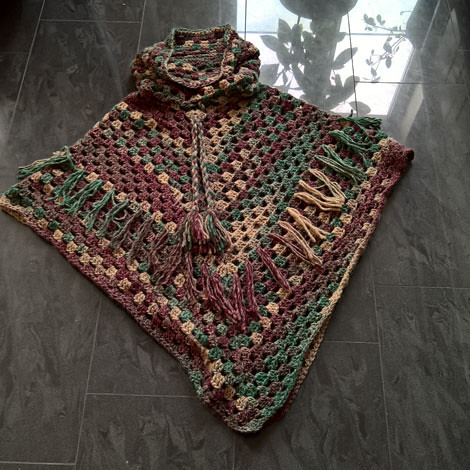 I can’t even remember exactly when I started, worked on, or finished this thing, but apparently it happened! I really love this poncho, it’s nice and big and it’s very comfy, but for some reason not blogging about it made me completely forget about it 🙁 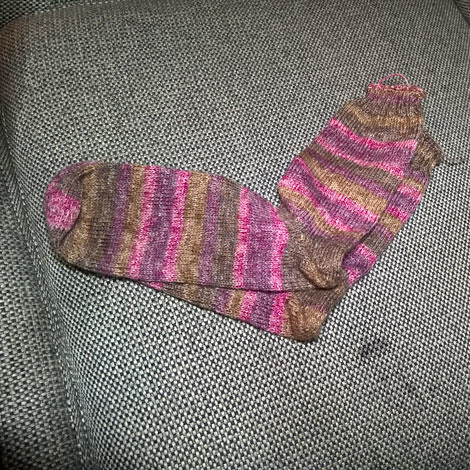 The same goes for these socks. I remember what happened to them and where they went (and I’m happy they went there!) but I can’t remember knitting them. It’s so odd. I was actually confused when I saw this picture at first but when I remembered I was even more confused as to why I had forgotten about them. 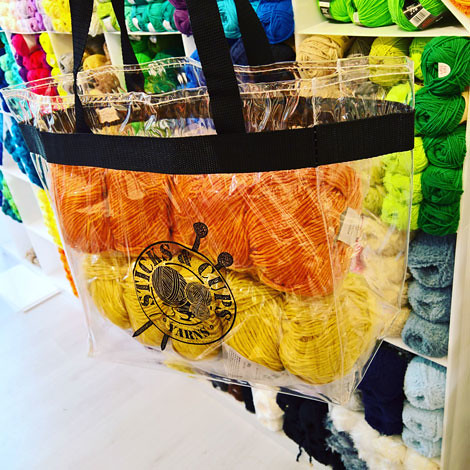 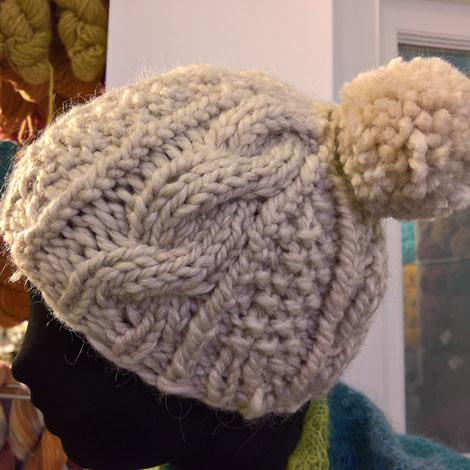 This is a free pattern by lionbrand, the yarn is Peru by scheepjes. I wanted to test it and see what it would look like. I mostly sell Scheepjes yarns, but it’s always nice to knit something to see what it does in different situations. 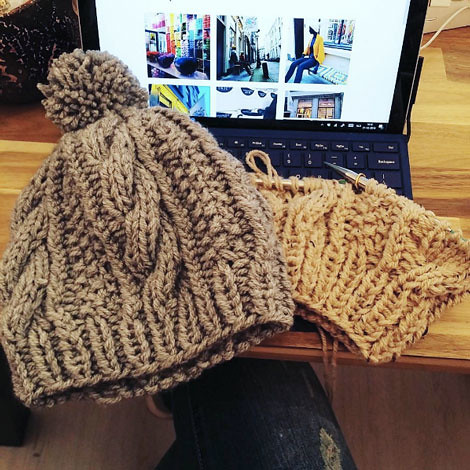 What I love most is to experiment with different yarns to see how they behave. The top picture was knit with Scheepjes Peru, the bottom hats are knit with the same needle size and the same pattern, but with Scheepjes Pittsburg held double. I have to say I like the crispness of the cables in this picture. The Peru one has a softer quality. Obviously the filter is helping too,  but they’re a lot more crisp in real life too. This was a very interesting experiment! 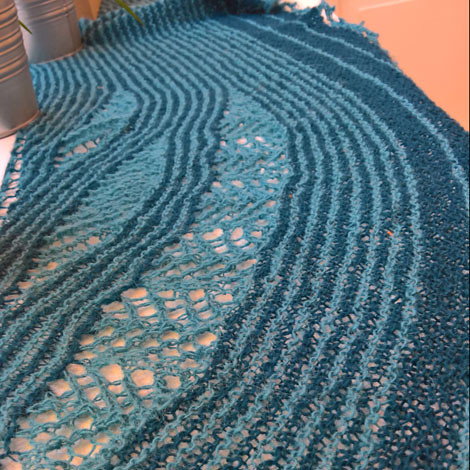 This is “waiting for the rain” in einband lopi to show both the yarn and the pattern, because we also do in-store-ravelry sales and having a sample works a lot better than just printing a picture. 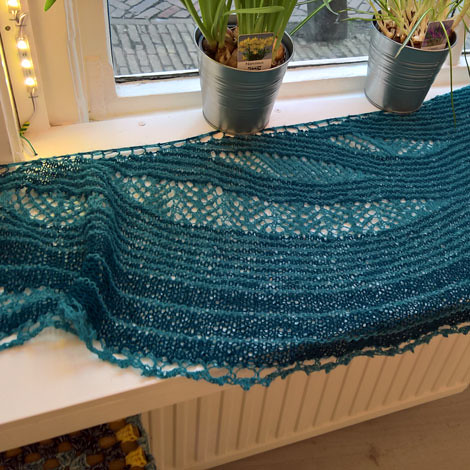 I love how this turned out! I stress-knit it while in France in September and I remember having to stop because my hand started to hurt. Then when I was getting better and could knit again I didn’t have enough yarn and had to stop knitting. 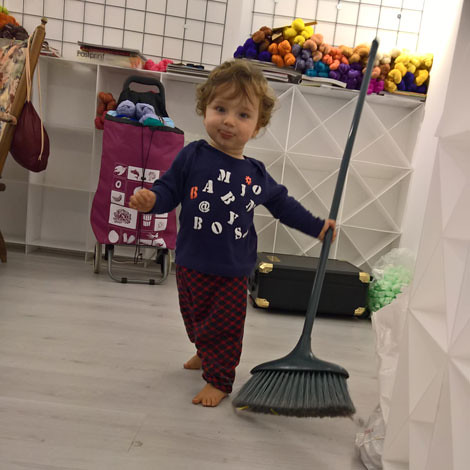 Of course I can’t blog without thanking my little helper for being a huge part of my inspiration. This little monster is so active I have a hard time keeping up 🙂 But he looks so good in knitting <3 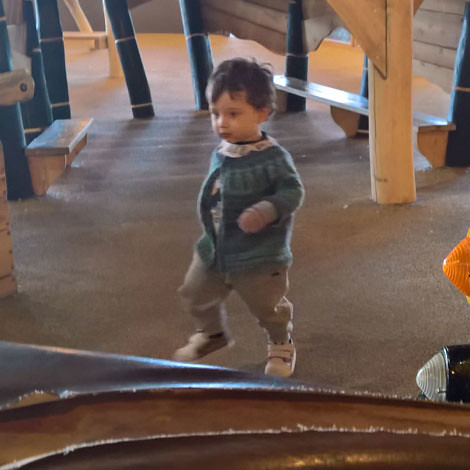 Here he is running around with the handspun seahorse vest I knit him in September. It took a while to finish and it’s really too big for him, but it’s okay, he looks adorable in it haha 😀 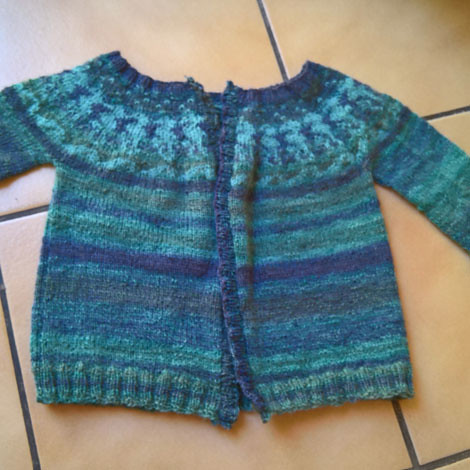 I joined the madness of Sock Madness 11 and I’ve plundered my stash for sock yarn. I’ll tell you all about it next time (because I have beads and they arrived at the shop today and I need to see them and organize them first before I can make any decisions!