I started this post a few nights ago (on my phone no less) while feeding Melina. On the one hand I’m impressed with myself for being so proactive (yay me), on the other hand it’s a silly idea and it almost always ends up in having to redo a lot of work haha.

In the past few days (since I started this post) I’ve had crochet on my mind. It’s safe to say that crochet and myself have always had a very interesting relationship. Where I feel my knitting skills have evolved and improved a lot, I never spent as much time on my crochet skills. I learned crochet from my grandmother when I was very little after watching her finish loofah after loofah. Yes, my grandmother handmade her loofahs and we all had them. It’s weird, and I think this is why I never spent so much time on my crochet skills, at some point I learned that knitting was a creative skill and crochet was an essential skill. You used crochet to make stuff you needed, and you used knitting to make stuff you wanted.

In my family, crochet has never been used to make garments. It’s always been either doilies or loofahs and I guess I always accepted this as a given. So in my mind there was nothing else to do. There’s also granny squares, but the use of those was extremely limited as well. So to be honest I never have it another thought.

Even when I tried my hand at crochet, I still feel it wasn’t really something I believed in. I saw a lot of incredibly pretty stuff, and I tried to make some things as well, but it never really took off the way knitting did. I now believe that this mindset has had a lot to do with it.

In 2009, when I started knitting again, I bought a lot of different yarns to experiment with. One of those yarns was a gray boucle, 100% acrylics yarn. I wanted to make a poncho with (of course) 3,0mm. 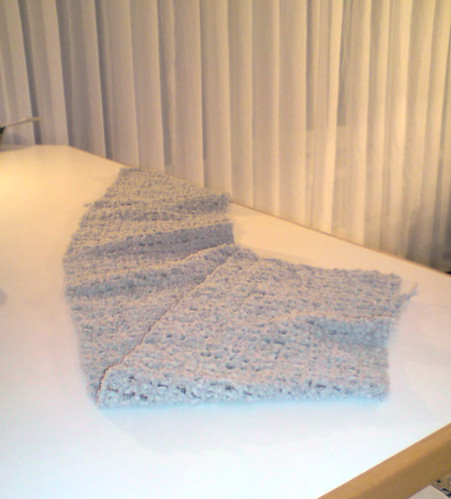 I have to be honest here, I did get farther than I thought I’d get. I didn’t use any fancy pattern here. I just went with what I knew, which was DC, chain 1, repeat until you grow a beard.

In essence there’s nothing inherently wrong with it, it’s just a very boring pattern, in a very unfroggable yarn, with a hook that’s actually too small for a huge project when you’re only beginning again after such a long time. I obviously didn’t finish it and I also didn’t frog it as the yarn was, again, unfroggable. It’s a shame though because it had a lot of potential. The yarn wasn’t really bad, it was just unsuitable for my level at the time and project.

One of the biggest issues with my first projects is the lack of attention I had for the chosen pattern, the yarn, and finally, paying attention to the actual writing in the pattern. I scanned it, and just went with it. So this Drops top didn’t work out the way I hoped because I made it waaay too big. I could wrap it round myself twice. I think I frogged it to reclaim the yarn, but I never actually made anything with the yarn anymore. It’s actually a shame, because I spent a lot of time working on it, but only stopped to try it on after a week of crocheting.

I gave it up for a little while until the crochet bug bit me again in 2011. I had seen a pretty stole and I wanted to give it another shot. So here’s what went wrong. Crochet works very well when you use thicker yarns, so after a few failed attempts I went with this version. 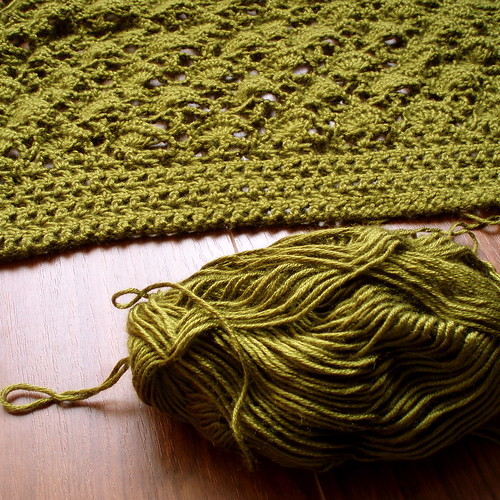 The yarn is a very soft 100% acrylics yarn from the chain store Wibra and it was very nice to work with. The problem with this stole was the pattern in combination with the yarn. The yarn was a bit ‘hairy’ and made the stitches hard to see for me. So I kept messing the edges up and it would go wider and narrower and after a while I gave up. I also didn’t like the middle section which was completely different from the rest and stood out too much.

Even though the projects didn’t work out, I kept trying my hand at crochet. I have a very difficult taste I guess and so I tried the avalon top. I actually tried this one again recently, but I think I’m not supposed to have this top 🙁 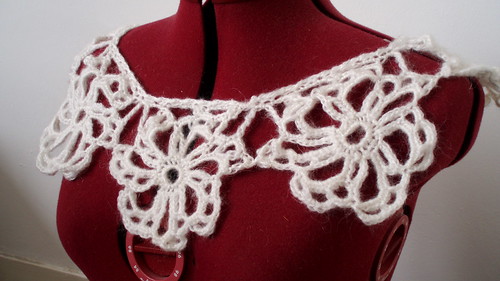 I loved (and still love) this project, but the yarn I chose was wrong. It was a fuzzy, mohair-ish kind of yarn and even though it was pretty, it was really hard to see the stitches.

I kept trying to make projects that were actually too difficult and yes, too abitious. It’s great if you can manage, but I had the attention span of a goldfish and a lot of things to do, so I decided to give it a little rest.

A year later in 2012 I gave it another shot, but this time I decided to actually finish something. I went with cheap DK weight acrylics and crocheted this with the yarn held double and a (I think) 12 mm hook. A nice, chunky infinity cowl in the most basic of stitches. DC, ch 1. 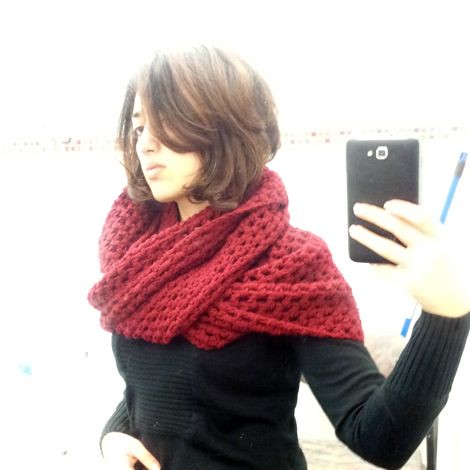 I guess there a lot you can say about me, but I’m stubborn 😛 I may fall  a lot, but I get up and finish it.

I had started this project earlier but I didn’t know what to make of it. I had a number of crocheted granny squares that were supposed to become a Drops shawl, but they became a Kirby blanket. 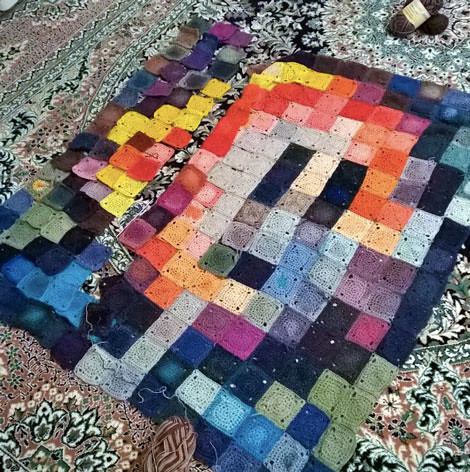 It’s still not done, but I’m not happy with the edge so it’s hibernating for now.. 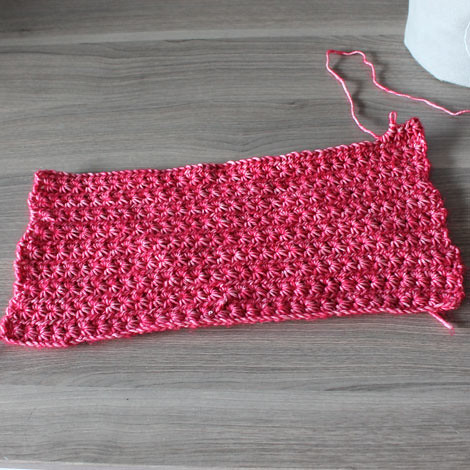 In 2014 I wanted to make a laptop cozy but I guess I forgot about this project. I really liked the stitches but at some point I never finished it, and I can’t really remember why.

Then I forgot about crochet again until 2016. I had a few balls of lopi lying around and decided to give Noodles a little blanket. 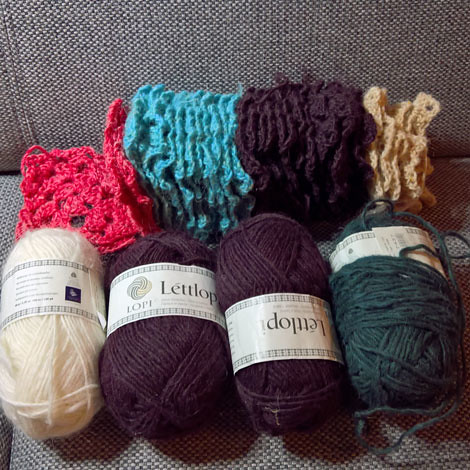 Another set of granny squares. 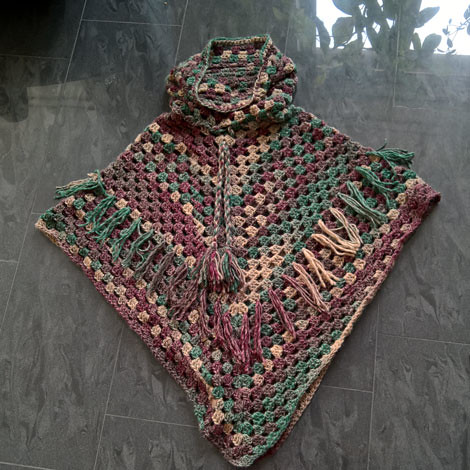 Even though the Noodle blanket isn’t finished yet, I did manage to finish (finally) a poncho in 2016! Gaucho, a pattern by Drops is still loved dearly and used frequently. I noticed that this project got finished because I (finally) didn’t have to think about what to do next. I like having patterns to follow, but knitting patterns are difficult to follow because I always have to adjust to fit. I’m shorter than standard and I always have to measure and recalculate. Not that there’s anything wrong with that, but when I’m adjusting anyway, I might as well chang this, and that, and oops I redesigned the project.

So in 2917 I started a few projects as well. I started with the Hygge CAL but realized I had too much to do, to many projects and honestly not enough use for a crocheted stole. I was really sad because I did really want to join. 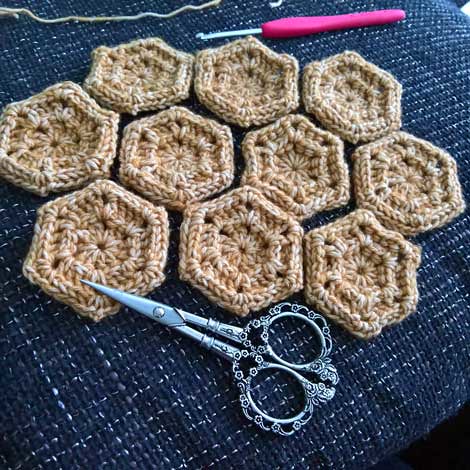 So instead of the Hygge CAL I decided to make the honeybee stole. It’s hexagons (for a change), but the great thing is that they’re textured and there’s a lot of cute details on it (little bees!). This project is currently hibernating as well, because I ran out of yarn! 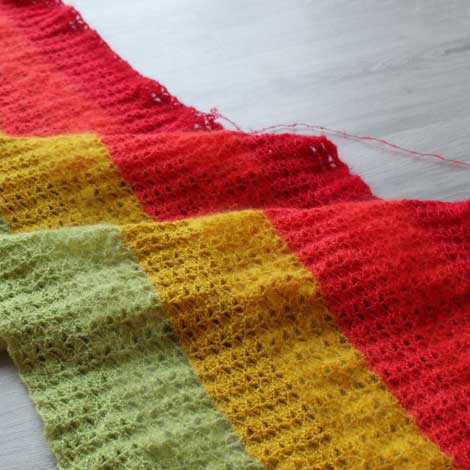 Here’s the seashell pashmina shawl by HappyInRed. I’m finally working on the final color (this is an older picture because I left it at my moms house) and I absolutely LOVE it! I do need to take breaks but that’s because my eyes get tired because I mostly work in the evenings when the kids are asleep and I have time to sit down and relax. At the moment I lost my amazing headlamp (WHERE IS ITTT?!?!?) so I can’t see what I’m doing.

I’m enjoying the process because it’s going to be done soon and I won’t get to work on it anymore. 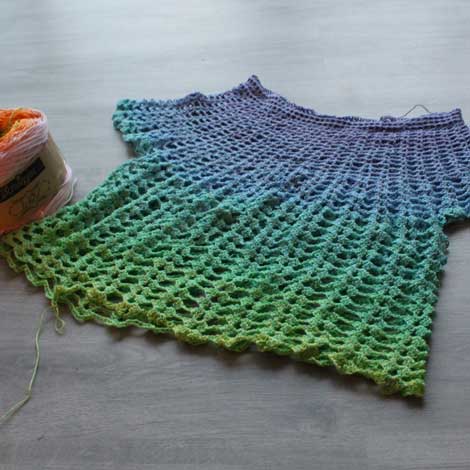 At the moment I’m working on these two projects. The first one is a very simple tunic design I’m making. I was browsing pinterest pictures and I found something I liked, but I realized that I didn’t find it practical. It was more or less a poncho with a skirt attached to it. Though I love the design and it’s very dramatic and awesome, it’s not very practical. You can’t wear a coat over it, and honestly the poncho thing only looks good when you have your arms up. When you have your arms down you’re basically wearing a skirt over your arms.

So I adapted the pattern, separated the sleeves and I’m going to go on until I run out of yarn. I’m going to make a nice edgeing though, but I don’t want the colors to end abruptly, so I’m thinking of different edgeing styles. 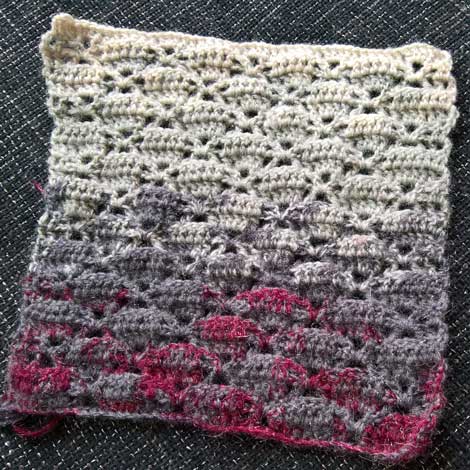 I’m also working on this project. I found her blog while browsing pinterest and she’s got some kick-ass patterns! Looking back on all of the things I’ve worked on, its finally time to take the next step and crochet me some wearable items. She has a lot of nice things but I’m going to start with her long vest.

At the moment I’m swatching to see what works best, but I’m pretty sure I’m going to go with Stardust by Scheepjes. I’m going to hold the yarn double because a single strand is too thin. I made a swatch with both 4.0mm and 4,5mm. I can already see I like the 4,5mm version best. You can see the differences below: 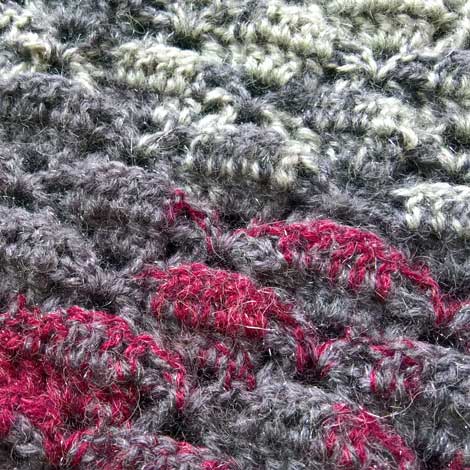 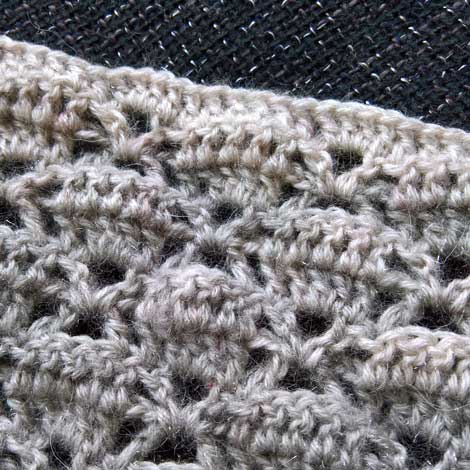 Now that I’ve got the swatches down I’m going to put it aside and enjoy the tought that I have something to start on once I’ve finished the other two projects. Haha, who am I kidding, the only reason I’m not starting on this project just yet is because I don’t have the right color and I have to pick it up at the shop tomorrow… so these other two projects best get finished before tomorrow…..