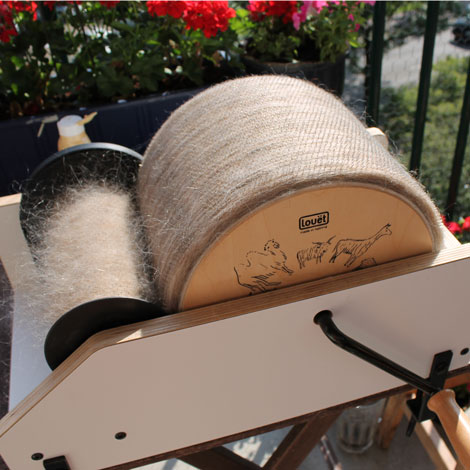 I decided to try some outdoor carding. Some nice music, some coffee and I had the time of my life, just carding away. Without even realizing I spent an entire day carding. Starting at 1pm and stopping at 11 pm when it became too dark to see out.

Apparently, that’s not really a great idea. I really enjoyed the carding, but I wasn’t paying attention to what was happening to my arm. I have wrist problems and this was really not helping at all. So I spent 2 days with a painful arm and joints and learned a very valuable lesson! Moderation is not so bad… 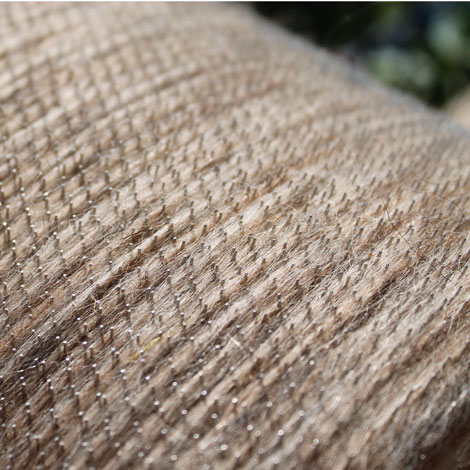 I really liked the proces and I’m very happy I finally caved and bought one. Carding by hand isn’t all that bad, but compared to this it’s much harder work and it takes much longer to process much less. I think I’ll be using this a lot! 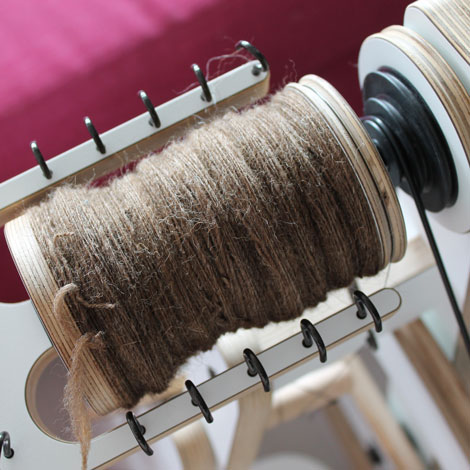 I really wanted to card some more, but I had to take a break because my arm was hurting too much. So I spent the next two days spinning yarn. I learned to spin with two hands open (from the Spin to Weave dvd) so I could spin comfortably without moving my right arm.

This is 100 grams of Manx Loaghtan I still had left from last years tour de fleece. I had bought a total of 500 grams and I was planning to make a 5 ply. I started spinning on my golding spindle, but I used the Bliss wheel to spin the last 250 grams. Looking back I believe it would’ve been better if I had spun smaller quantities on the spindle, instead of trying to force the whole 100 grams on there. The singles start out light when the cop was tiny, but they get thicker at the end (when the cop is very big). 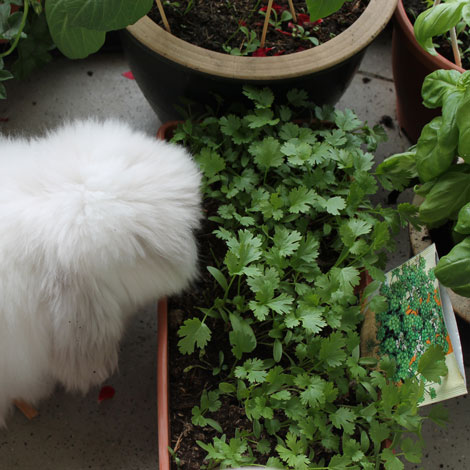 While sitting outside I decided to see if Bam liked the fresh koriander I had planted for him. He went in to sniff and appeared not to like it in the beginning. But he kept coming back for some more sniffing. After a while he decided to take a bite and before long there was nothing left. 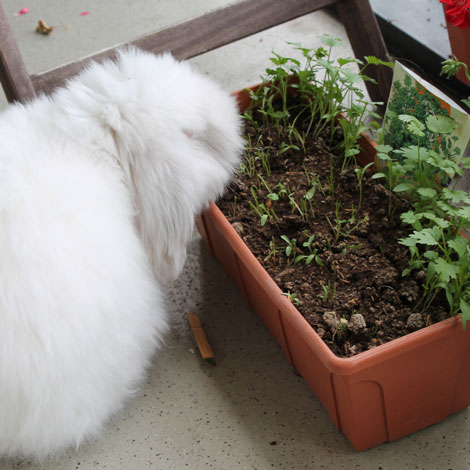 It took him two days to eat this much, but I think it was a great success. I had planted these so I could feed the bunnies, but also in hopes that they would leave the other plants alone once they had their own little plants to eat. Unfortunately it soft of backfired. Bam appeared to think that all plants must be delicious so he decided to eat all of the other plants as well. This ended up in me having to find a plan to save my plants. 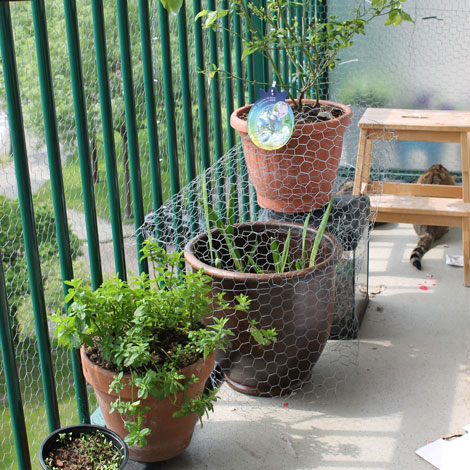 They can have the parsley (which they don’t really like), and the mint (which only Zuzu will eat). But the blueberry and gladiolus are off limits. Obviously this makes them smell and (probably) taste even better, so that’s the only thing that Zuzu (the other bunny, not pictured) will eat. So I had to protect the plants, and yes, this was all I could come up with. 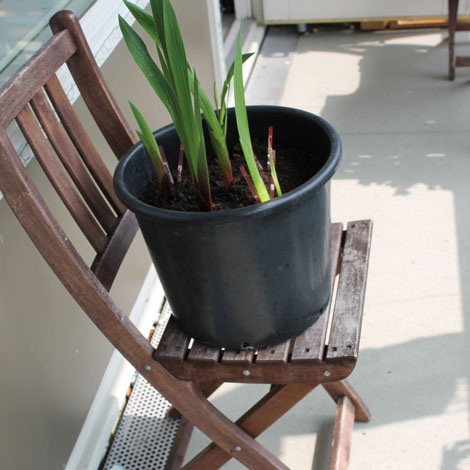 I’m still looking for a better solution, but I really want the bunnies to be able to go outside without me having to watch them all the time. They can’t get out (because I’ve fenced off everything), but I don’t want them to eat all the plants (and get sick). So I’ll have to deal with this weirdness for a few days until I come up with a better plan. 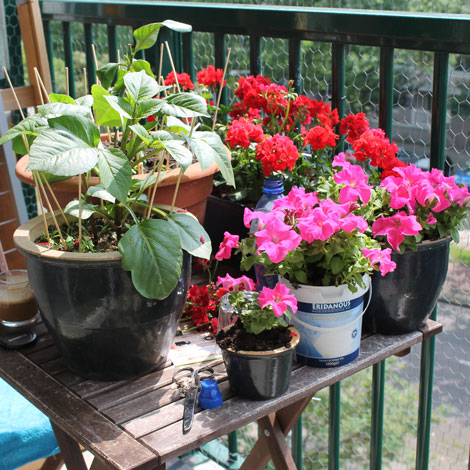 No use of the table either. 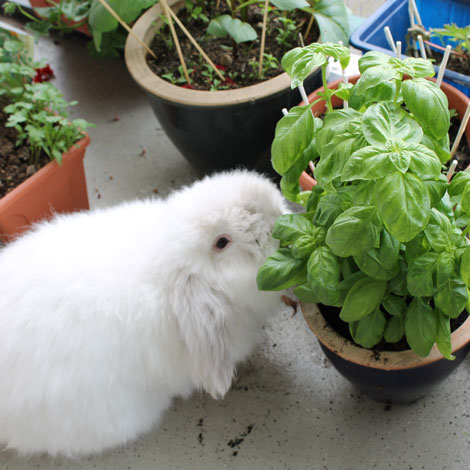 Bam soon realized that his best option was the Basil plant. He can have all the basil he wants so I say it’s a win-win situation for both of us 🙂 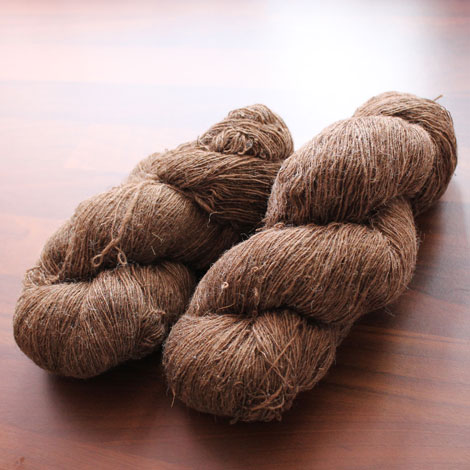 Back to the spinning. These are the 200 grams of handspun manx loaghtan I had spun last year. I finished the rest and plied them together. 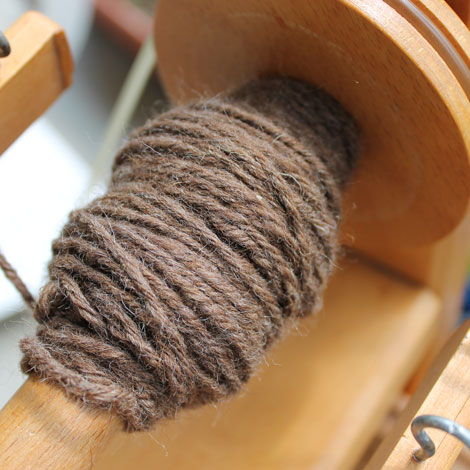 I decided to use the old Rotterdam for this job, instead of the Bliss. The Bliss is a much nicer wheel to spin on, but there isn’t much room on the bobbins to make a 5-ply, and I didn’t want to end up with a lot of knots in my final yarn. 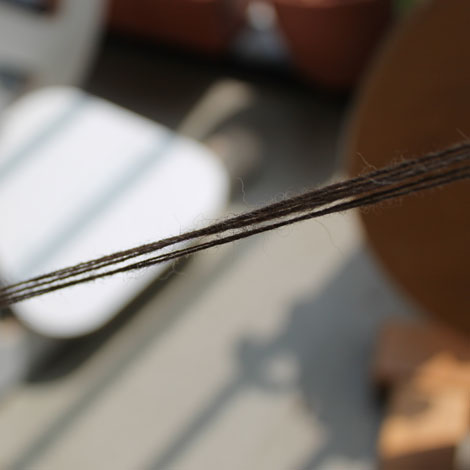 I really like this picture. The singles and both spinning wheels in the background. 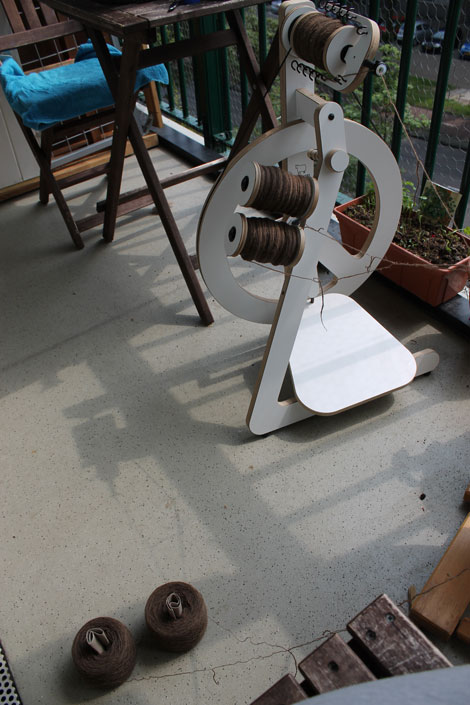 So this is how I ply. I ordered a set of 3 extra bobbins for the bliss, so I’ll be able to make such yarns in an easier fashion. At least it will also be possible to work on multiple projects now. 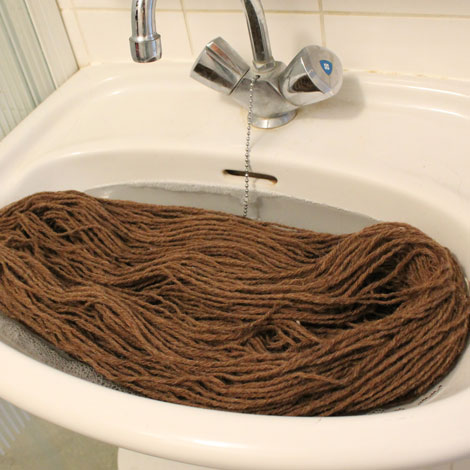 I don’t know how much yarn I have. I haven’t counted and weighed any of it yet. I ran out of one of the singles quite soon and I made some 4 ply yarn after that. The sizes don’t match so I won’t use them together, but there’s still enough to use for other purposes/ in combination with other yarns.

While the yarns are drying I’m going to relax and enjoy being 30. Have a great day everyone!