Before I start I’d like to say I just finished my vanilla socks, so even though I didn’t manage to finish them on Monday (as I planned), I did finish them this week, w00t! I also managed to finish another side project (for the second time) as well, but I’ll talk about those two project on the next post. I just wanted to put it out there haha.

So you may (or may not) have heard of the Baa-ble hat, it was/ is the official pattern for Shetland wool week 2015 and is free to download via the website (also on Ravelry I believe, just click on the linky). I think it’s one of the coolest hat designs out here, especially with a huge pompom <3. I’m not entirely sure how, (I think it was a featured project on Ravelry) but I stumbled upon this glorious version and an idea was born. I’m making my baby a Baa-ble hat too! But what fiber to use.. I was almost thinking about ransacking my fiber stash and taking matching colored chunks out of braids I have lying around when all of the sudden, like it was meant to be, Dutch Wool Diva posted pictures of these beauties on her Instagram.

(This image is “borrowed” from Dutch Wool Diva’s Instagram feed)

I believe it was on a Saturday evening when I decided that I wasn’t going to wait because these mini batts are perfection and they were exactly what I needed for my babies custom, handspun Baa-ble hat! So a little back and forth over Facebook resulted in me getting not only these gorgeous minibatts on tuesday, but I also got a little minibatt in black for the sheeps heads and legs, because she’s just that awesome <3 (I’m such a groupie lol).

Anyway, I’d only seen them on that picture, but I feel like they’re even better in real life. I took some pictures, but I can’t to them any justice, and capture the soft shades in the mini batts themselves. 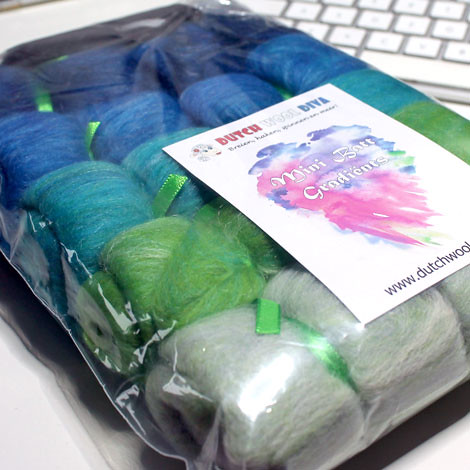 I took this picture under my daylight lamp, but it might’ve been a bit too much haha. I love this idea of gradients, as it’s hard to keep the colors clear when spin from a braid. This way you have complete artistic freedom when it comes to working with the colors. 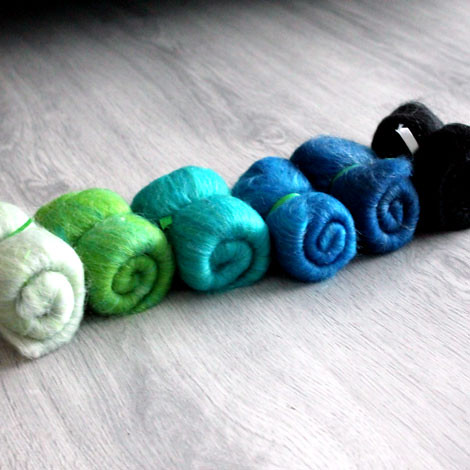 In total it’s 100 grams, so it’s about 10 grams per minibatt, and there’s two minibatts of each color (except the black of course, which is not part of this gradient). Since I’m going to spin a baby hat, I’m going to use only one set of gradients to see how far I’ll get. The pattern calls for aran weight yarn and is knit using 4 and 4,5mm needles, which I think is a bit bulky for a 7 month old baby. Since I’m going for a soft gradient I’m going to spin the yarns into light fingering weight and hold them double while knitting on (probably) 3,5mm needles. This way I can achieve a nicer gradient by alternating between colors. 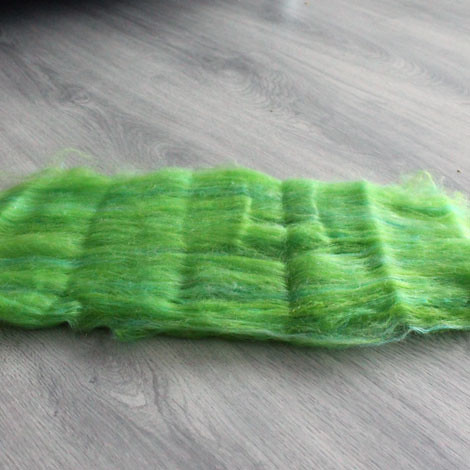 Even though 10 grams doesn’t sound like much, it’s a lot more than it seems when you open up the minibatt. 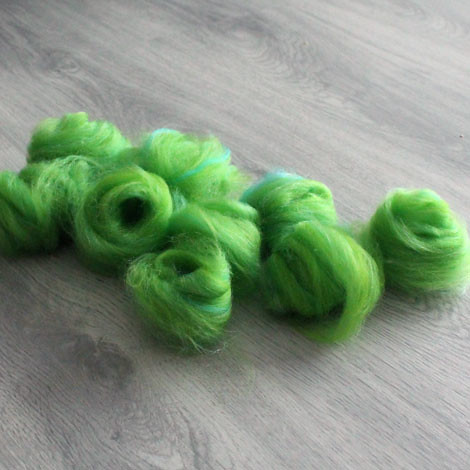 One of the things I always do before spinning is fiber prep. In my opinion, your yarn and your spinning is as good as your fiber prep, if you don’t spend enough time preparing your fiber before you start spinning, you’ll end up prepping your fiber while you’re spinning in the end. You’ll have to stop more often, you’ll have to draft a lot more and the process of spinning is overall a lot less enjoyable and less consistent. What’s also a lot less consistent is the yarn you’ll end up with. So prep your fiber before spinning people! I usually separate the batt into strips and then pre draft my strips into little balls. When I’m going to spin one, I’ll wind them around my wrist and spin away. This way I can spin one color in one go. 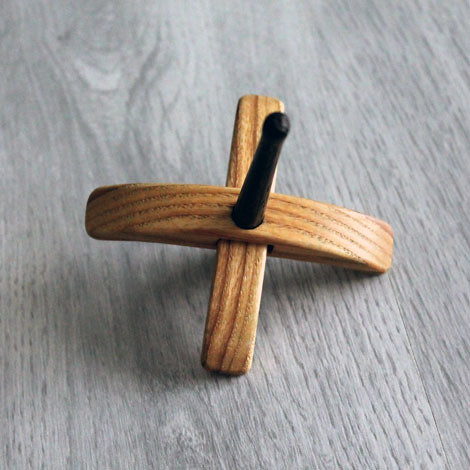 Even though I love my wheel, some things are best done on a spindle. A spindle is by no means in inferior tool, mind! You might enjoy the book “Respect the spindle” by Abby Franquemont if you do haha. It’s a very good book! Anyway, I feel like I have more control over my yarns when I spin them on a spindle. One of the reasons being that I have only 10 grams of color to work with at one time. This way it’s so much easier to just spin on a tiny spindle, rather than to take out the big equipment. I also noticed that I spin a lot more on a spindle because I can squeeze a lot of spinning in between other chores. The wheel is more suited for longer spinning sessions (imho).

I really love working on this spindle. The balance is amazing and I noticed that it’s the perfect weight for the kind of yarn I’m going for. This project is spun using the ply on the fly method, in which you (as the title suggests), ply, while you’re spinning. This technique seems a bit slow at first, but when you’re out of fiber you’re done spinning and end up with a finished yarn you can use immediately. I personally love using this method with my dropspindles because I feel like I get results faster. I’m very  obsessive about winding my cop and I feel like I get prettier cops and better results when I use the ply on the fly method.

I also feel like I have more control over the final yarn. If I ply and I end up with a chunkier yarn than I intended I can still un-ply that piece of yarn and adjust the weight a bit until I’m happy with it.

In other news, this is what my “roll the bones” socks look like at the moment. I’ve been focussing on finishing my vanilla socks and I haven’t touched them yet, but I’m very happy with the way they’re turning out. I actually wanted to get a few rows in, but I forgot my dice at my moms place, so there will be no knitting for me haha. I really love the idea of having dice and a very interesting (and constantly new) pattern to work on. I thought it’d be a fun pattern, but it’s a lot more fun than I thought it would be. I may need to knit myself and DH a pair as well..

I’m going to blog about this (now finished) vanilla sock as well, but I noticed that I didn’t have any real progress pictures on the blog and I should have at least two pictures before I can post an FO. Otherwise it’s almost as if this project never even existed at all haha. I have to say I’m very happy with vanilla socks, even though I love a good, complicated sock pattern, a nice, brainless vanilla sock is all I need at the moment (since I’m seriously brainless lol).

In non-knitting news my baby learned to sit on his own (when I place him in a sitting position that is, he can’t get up by himself yet), and apparently that’s all the excitement he’s willing to handle at the moment. 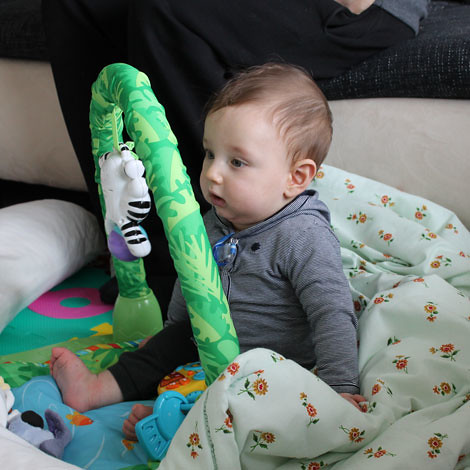 He loves sitting and being able to play without being held upright all the time (because he hated lying down haha), but at the same time it’s all very scary and exciting and he needs to make sure mommy still exists in this sitting world. I can’t move away or he’ll panic, the poor cute thing. It’s really adorable, but it also means that I’ve had quite some difficulty knitting (or getting anything else done for that matter, my kitchen has exploded). I was planning on blogging last Monday, for instance but I spent most of Monday hugging Ma’iq (how horrible hahaha).

I feel it’s time well spent, because I know it’s just a phase and there’ll come a time when he’s going to be too busy exploring to cuddle with me, so I’m enjoying it as much as I can for now <3